Well.  I’ve been meaning for a while to start doing some random blog posts on various currency movements, charts, and trades that are catching my attention.  But after writing a long blog post about what’s been going on with the US Dollar, I guess this is as good a time as any.1<- – – Click this little footnote.

Warning:  For non-FX and trading nerds, this post is going to be a bit more technical.2

And so presenting, in no particular order, some of the random thoughts and opinions I have right now on the FX market:

First, we moved to the sidelines in our Japanese Yen trade.

As I covered in detail in our multi-post series Of Mice & Yen, we think a short-Yen trade is still going to be a very attractive way to play what we believe will eventually be a Japanese debt crisis.  But… that theme probably takes a decade or more to play out.  And in the short run, the trade didn’t feel right and we moved to the sidelines with the goal of revisiting it later.

For the past year or so, the Yen would weaken, then consolidate, then weaken further, then consolidate.  So we shorted the Yen on the last breakout above 122.  However… the Yen didn’t weaken very far that time and it settled into a very choppy sideways movement.  So we used a “time stop” rather than a price stop, deciding that the Yen not doing what we expected – going much lower and breaking through 126 – was enough reason to exit the trade.

Well, that was last Monday (the 17th).  We booked a small profit3 and put the pair back on the watch list.  Which was – I will very honestly admit – very lucky timing.  Cause a few days later the bottom fell out: 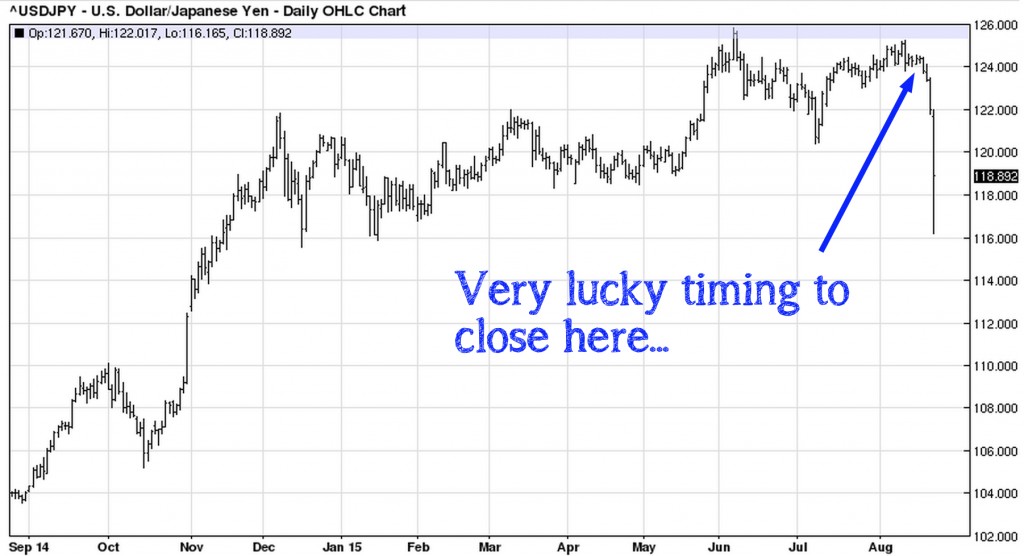 Note: for this pair the base currency is the Yen, so “up” on the chart means Dollar stronger and Yen weaker.

It would be nice to tell you that I closed the trade because I saw a massive spike in the Yen a few days away, but that would not be true.  Sure, I didn’t like the action in the Yen and thought we’d be able to get back into the trade at a better price, but of course I could not have predicted such a violent move.  So it was somewhat lucky timing.  And I’m cool with that.

Now, however, I am considering the possibility that when we do revisit a short-Yen trade… we might buy the Australian Dollar against the Yen instead of the US Dollar.  10 Year Chart: 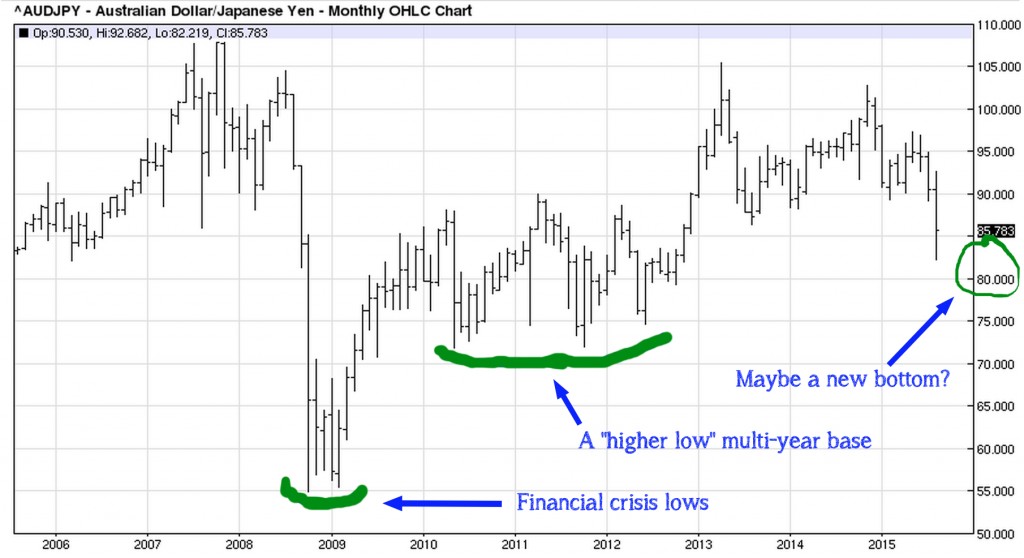 The AUDJPY pair has been beaten down pretty hard as well the past week.  So if we’re looking for a potential multi-year carry trade… the Aussie might be a good way to play this.  Definitely not going to try to catch a falling knife and call a bottom in this one.  Instead, we’ll be watching to see how the Australian Dollar reacts going forward in this current “anti-global-growth-and-anything-related-to-China” sell-off.  If the pair finds support and appears to be forming a new “higher low,” we might take a shot.

The USDMXN pair has been pure death.  The selling pressure on the Peso just.will.not.stop: 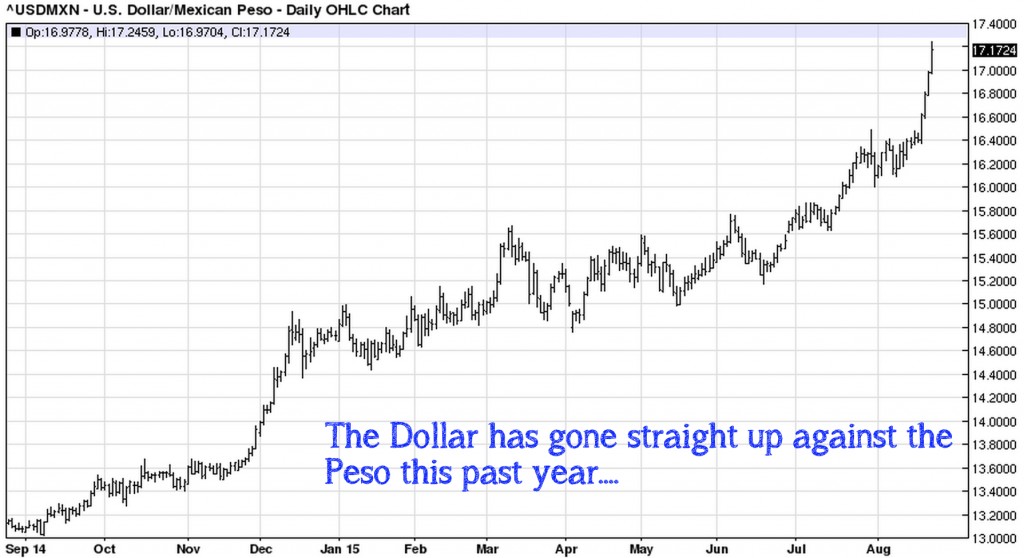 The Peso is the base currency in this pair, so “up” means a stronger Dollar and weaker Peso.

So I keep sitting on the sidelines.  And I keep being wrong in guessing where the carnage will end.

But.  Eventually it will.  If we can get past the short term selling pressure, on a longer timeline I do think this could set up as a great trade.  I have delusions of grandeur of riding this pair all the way back down below 13.  But first the Peso needs to find a bottom.  And so… I guess it’ll be the sidelines a bit longer.

But we finally put on an “oil” trade.

I’ve been watching a lot of the “oil currencies.”  For almost a year.  And have just been sitting on my hands.4

Obviously the wild sell-off in oil over the past year has been rough on the oil exporters… and their currencies.  The Russian Ruble, Nigerian Naira, Colombian Peso, Mexican Peso,5 and others.  All of those charts look like grim death.

But… I wanted to start a position with some oil exposure.  Not for a quick trade, but in advance of what will eventually be a recovery in oil prices.  Given that BGIP is a tiny start-up fund, I don’t have the ability to trade some of those currencies directly (the Naira and Columbia Peso) and others I wouldn’t touch right now under just about any circumstances (the Ruble), but for those that I can trade… I decided on the Norwegian Krone and we started a position during the European session this morning.6

I like the Krone because 1) despite the fall in oil prices causing problems for the Norwegian economy… this is a very wealthy and well-run country with a near-trillion-dollar sovereign wealth fund.7 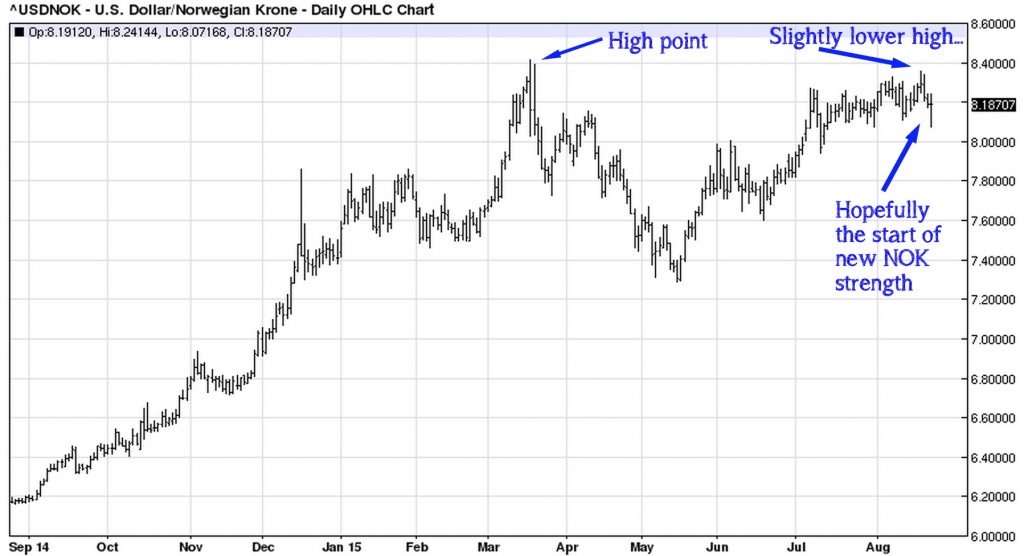 So we’ll be very patient with this trade since it’s our first attempt at playing an eventual recovery in oil.  We started the trade out pretty small, so we have some room to add to the position.  That said, we are betting that the bottom in the Krone is in, so a close above 8.4ish would likely force us back to the sidelines. 8

We took another shot at this potential top in the Dollar.

While that previous short of the USDNOK was more of an “oil has to stop falling at some point” trade for us rather than a bet against the US Dollar… for all of the reasons I wrote about in Part 2 of my Effect of FX post, I wanted to take another short-Dollar position.

After looking at several pairs… (the Canadian, Aussie, and New Zealand Dollars as well as some less-frequently traded currencies), I settled on the Swedish Krona.  The economic data out of Sweden has been pretty good lately, and it has been one currency that has strengthened against the Dollar recently: 9 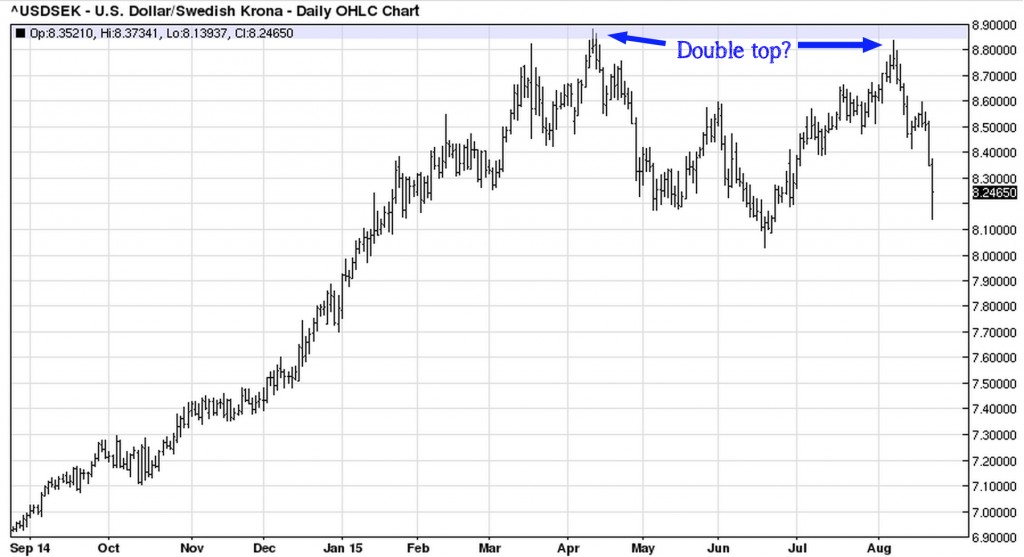 I had been watching this pair for a few days – and was hoping for a bounce back into the 8.6 to 8.7 range – but didn’t get it so decided to pull the trigger today anyway.

So.  Now we are short USD.SEK as well.

This has been a great trade so far.  We first bought Euros a little above 1.09 back on May 29,10  and added to the trade on a dip below 1.10 in early July.  So now we are nicely insulated and riding the pair higher: 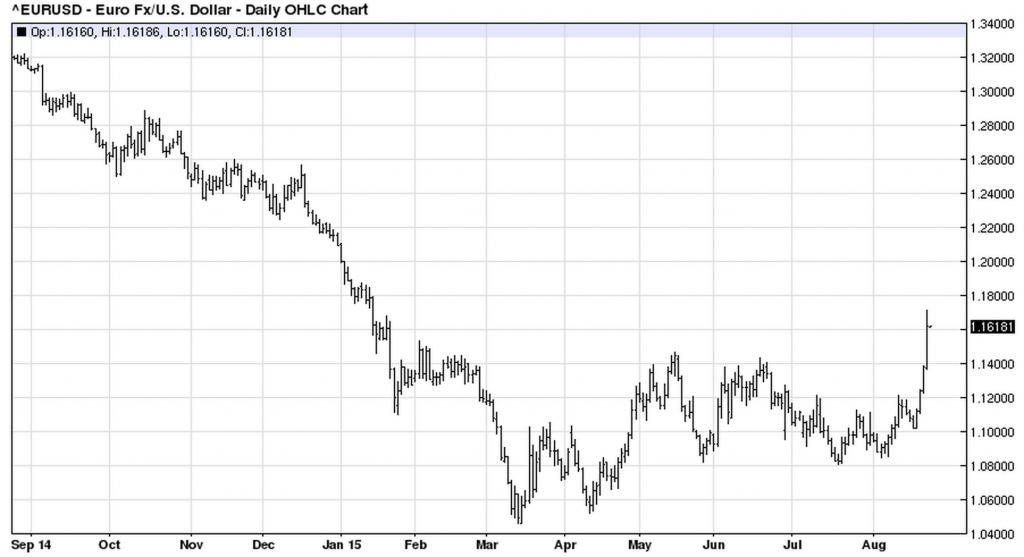 While we are pleased with the short term gains… we are in this trade with a bigger end game in mind.  Here’s a long term view of the Euro/Dollar pair, which I think makes for a pretty compelling chart.  15 year Chart:

The Euro has been bouncing around that well defined channel for almost 10 years now.  If I am correct in thinking the US Dollar may have seen a top – at least for a while – then I can’t rule out seeing high 1.20s again on the EURUSD pair.  We’re hoping to ride the pair all the way back up.

The danger in our current positions.

So obviously I believe that the US Dollar is nearing a top.  And we’ve bought Euros, Norwegian Krone, and Swedish Krona, accordingly, expecting each to strengthen against the Dollar.

Of course I could be individually wrong about any one of those currency pairs.  But the greater risk is that while we bought Euros, Krone, and Krona for different reasons… these trades are all correlated as “short Dollar” trades.

So the biggest risk is that I am wrong – or early – and the US Dollar resumes the march higher.11  So we’ll continue to monitor not only these individual trades, but the overall environment for the Dollar.

As I have written about at length in recent posts, it’s all going to come down to the Fed’s eventual plans for a rate hike.  The carnage in the markets the past few trading days will certainly have some effect on their September meeting. 12

Until then, we’ll probably sit tight with what we have and keep watching the others noted above.

Position Disclosure:  Long EUR.USD, short USD.NOK, short USD.SEK at the time of writing, both in BGIP and in personal retirement accounts.