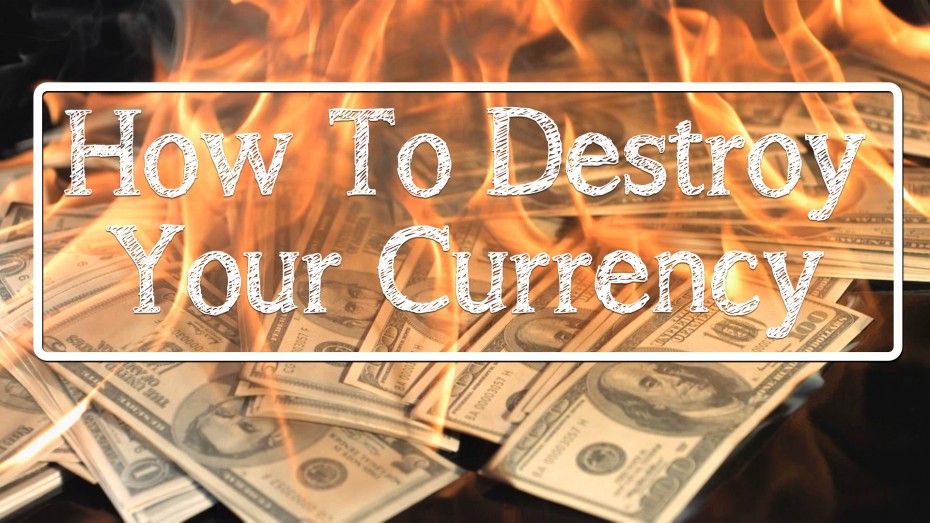 One reason we are having so much fun here is that a strong US Dollar (“USD”) and a very weak South African Rand (“ZAR”)2 make spending here much easier on the wallet.  For example, this amazing fillet with a peppercorn, mustard and pinotage brandy sauce with fried portobellini mushrooms, parmesan potato gratin, and rocket salad with black truffle oil… 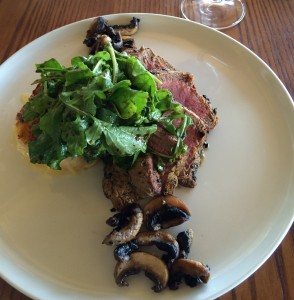 And it’s even shaped like Africa. I know, right?

But although we love South Africa as tourists from the tailwinds of our strong dollar, from an investment perspective at the macro level (currency, sovereign bond market, high level stock market, etc), I’m staying away.  Far far away.3

Why you may ask?

Well… let’s get right to the not-pulling-any-punches analysis of South Africa’s woes.

President Zuma has destroyed the currency.

And destroyed really is the best way to put it.  Not sure what I mean by that?  Well, the following is a five year chart of the US Dollar vs the Rand: 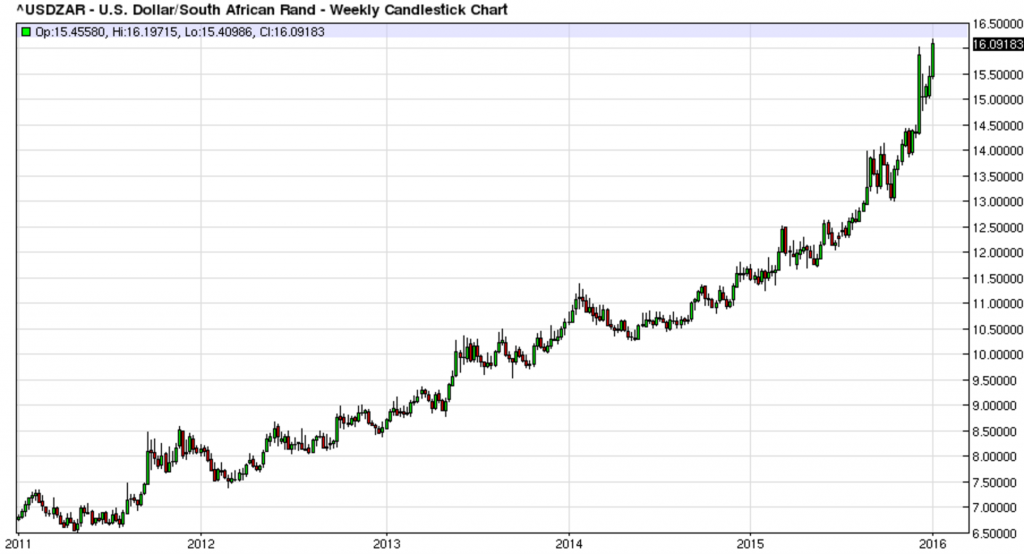 “Up” on this chart means the Dollar is stronger and the Rand weaker.

Right?  Pretty ugly.  Five years ago a dollar would only get you seven Rand.  Now it gets you SIXTEEN.

This is one of the ugliest currency charts I follow.4  But even if you don’t follow FX, you can see how bad that trend looks.  So, the question then becomes… how exactly does one destroy one’s currency??? 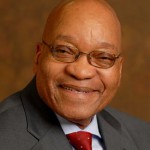 This is South Africa’s President, Jacob Zuma.  I chose a smiling happy nice Zuma picture because, well… frankly… it’s the last time I’m going to be nice to him in this post.

To start out with a story that will make you not like him either, he’s from Nkandla in the eastern part of the country5 which is one of the poorest areas of South Africa.  Unemployment there is ninety percent.6

And so, naturally, President Zuma decided to use about $23 million of public funds to turn his home there into a luxury compound complete with helipad.  The press calls it Zumaville.  Here’s another cool graphic about what all is being built there.

Before becoming President, this model citizen was charged – but not convicted to be fair – of 783 charges of corruption, fraud, money-laundering and tax evasion.  It’s as scathing as this article suggests.

In keeping with his “man of the ordinary people” image, President Zuma also wanted to spend 4 billion Rand on a new presidential Jet.  That’s over $260 million US dollars.  Maybe they should call it Air Force Dumb.

And yes, there are more not-very-smart things.  Like pushing forward a questionable nuclear power plant deal with Russia “without doing a cost-benefit analysis” that will cost the country 1 trillion Rand.  A deal which the country likely cannot afford.

These are of course all bad things.  Very bad. 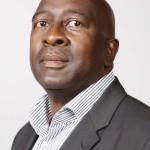 But luckily there was a guy – South Africa’s Finance Minister Nhlanhla Nene – who knew these were bad things and tried to stop them.  He effectively blocked Zuma from buying the jet7 and was also trying to block the near-bankrupt and always on government life support South African Airways from renegotiating a deal for new jets that was going to be well, really really expensive.8 9

I guess Mr. Nene felt that he could stand up to Zuma because he was very widely respected in the international finance community.

So what did President Zuma do?  Well he threw a tissy and removed Nene from his post.

And of course, if you are getting rid of the guy that’s telling you “no you cannot have new toys Mr. President” then while you are at it the obvious choice is to replace the highly-respected-on-the-international-finance-circuit Finance Minister with a new “yes man” that no one has heard of.  A guy named David Van Rooyen.

And oooooohhhh boy did international finance markets not like that.  Here’s what traders did to the Rand in the roughly 48 hours that followed: 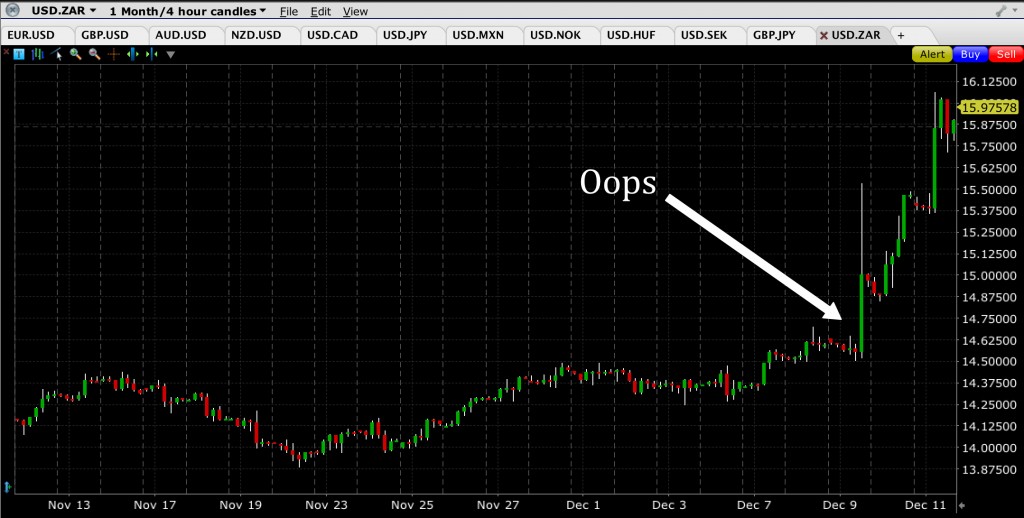 Luckily, President Zuma noticed that his country’s currency was collapsing and made another change to the Finance Minister post.  Of course he would never reinstate Nene, but he was at least wise enough to pick someone that the markets would like.  The new10 Finance Minister is Pravin Gordhan and fortunately he is also pretty widely admired in the international finance community.  He was finance minister from 2009 to 2014 and is given a lot of credit for helping to lead South Africa out of recession.

So we have a new/new Fin Min and everything’s cool now.  Problem solved, right?  Well, actually, no.

Unfortunately South Africa’s problems are much bigger than the Fin Min post.

Overall it is a positive that President Zuma reversed course and has given the Finance Ministry reins back to someone that is likely to, well, keep Zuma from driving the currency further off the cliff.  Mr. Gordhan has already made some positive authoritative-sounding statements to reassure the markets.  Oh, and remember that SA Airlines “we want new planes” battle?  Well Mr. Gordhan stuck to Mr. Nene’s position.  And he won.  SAA will NOT get they planes that they cannot afford.11

So assuming the Finance Minister drama is over and won’t affect the Rand further, what are the other issues that I’m so worried about?

Luckily, as this article is already quite long, The Economist wrote an article last week that12 sums up S. Africa’s economic troubles, so I’ve just linked to that here.  But here’s a few highlights of the bad stuff in case you don’t want to read the whole thing:

So South Africa has a looooong way to go.  Personally, my bet is that the country is downgraded to junk soon since I have about 0% faith in President Zuma’s ability to get the country’s finances under control.  This would be disastrous for the country.  This is a deep topic, so I’ll just sum it up.  For more read here, here, and here.

The short version is that if South Africa’s bonds are downgraded to junk:

Don’t take my word for it.  During the Finance Minister drama/shuffle, S. Africa’s bond yields rose 15% that week, making it more expensive to borrow money from the markets to fund the government’s deficit.  South Africa cannot afford for this trend to continue, but all signs suggest it will.

Before we visited the country on our round-the-world trip, I had watched the Rand plummet and was wondering if it was time to buy.  If you’d told me a few years ago at 7 or 8 to the Dollar that we’d see an exchange rate of 15:1…. I would have said “no way.”  That would have seemed crazy.  But I – like many others – underestimated Zuma’s capacity for stupid decision making.

Now… I’m honestly starting to think should the country’s debt be downgraded to junk we might even see 20:1 on the Rand.  I’ve actually been looking for a pullback to sell Rand against the Dollar, but didn’t get much of one.  It pretty much went straight from 15 to 16 to the Dollar.  The technical trend is very very ugly.  The fundamentals are very very ugly.  And the near-term future for the Rand is probably very very ugly.

But maybe eventually probably hopefully there could be a turn for the better.

If there is any silver lining, it is that President Zuma’s term ends in 2017 and fortunately South Africa’s constitution has a two term limit.  Further… several locals that we have spoken with have mentioned that Zuma’s popularity has fallen so far that he might not even make it through 2016.  Time shall tell.

Hopefully the country will have learned something from Zuma’s failures and the next President will be more qualified to do the right thing and focus on the economy.  Hopefully.

Because South Africa’s President should not be able to build a personal palace like this: 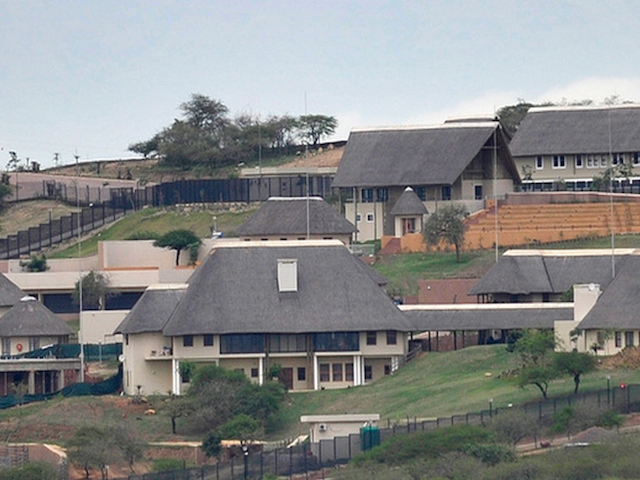 …until the country can get rid of the townships, slums, and illegal shanty towns that we passed on the freeway like these: 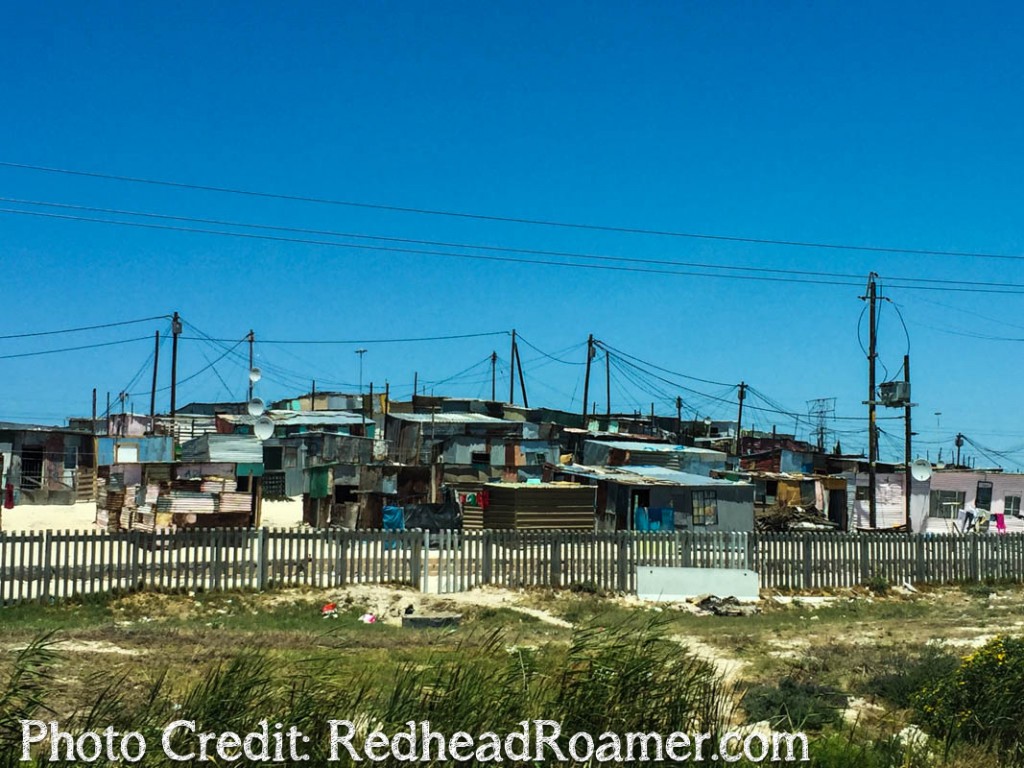 And so here we are.  After a few weeks in the country, rather than finding a great opportunity to buy up some Rand or the promise of great investment opportunities, instead I feel like the worst is still to come.

I hope I am wrong.  Not for me, or my trading P&L, or my fund, or any other selfish reason.  But because the police, customs agents, normal citizens on the street, hotel staff, servers, Uber drivers, random shoppers and diners, and literally every other person we met in South Africa was amazingly friendly and carried a big smile.  They deserve better.  Much, much better.

Well.  Hopefully I ended this on a positive note.  It’s not always easy to find a silver lining.

Anyway… as always thanks for reading,
Christopher