We’ve been to quite a few cities now where I’ve found myself saying “Wow.  This is beautiful.  You would never know that a major war tore this place apart X number of years ago…”1

Not the case with Sarajevo.

Granted the Siege of Sarajevo occurred not that long ago, but despite all of the rebuilding and repair that has taken place, you definitely see the city’s scars.  And as you walk around the city, while it sounds strange and is hard to explain, you can actually feel it.  Sarajevo’s tragic history is tattooed on its soul.

Despite the somber feeling you often get strolling the city streets or climbing its beautiful hills… this is still a great city with a lot of energy and you do get the impression that it has fought hard to put the past behind it.  To look towards a brighter future.

We had only four days here, but I’d love to have spent a week or more.  Such a great place.  As usual, RedheadRoamer.com will have our full play-by-play up soon, but in the meantime here are a few of my highlights.

The view from just about anywhere in the city will include green hills dotted with red rooftops.

A walk along the river, which flows right through the heart of the city. 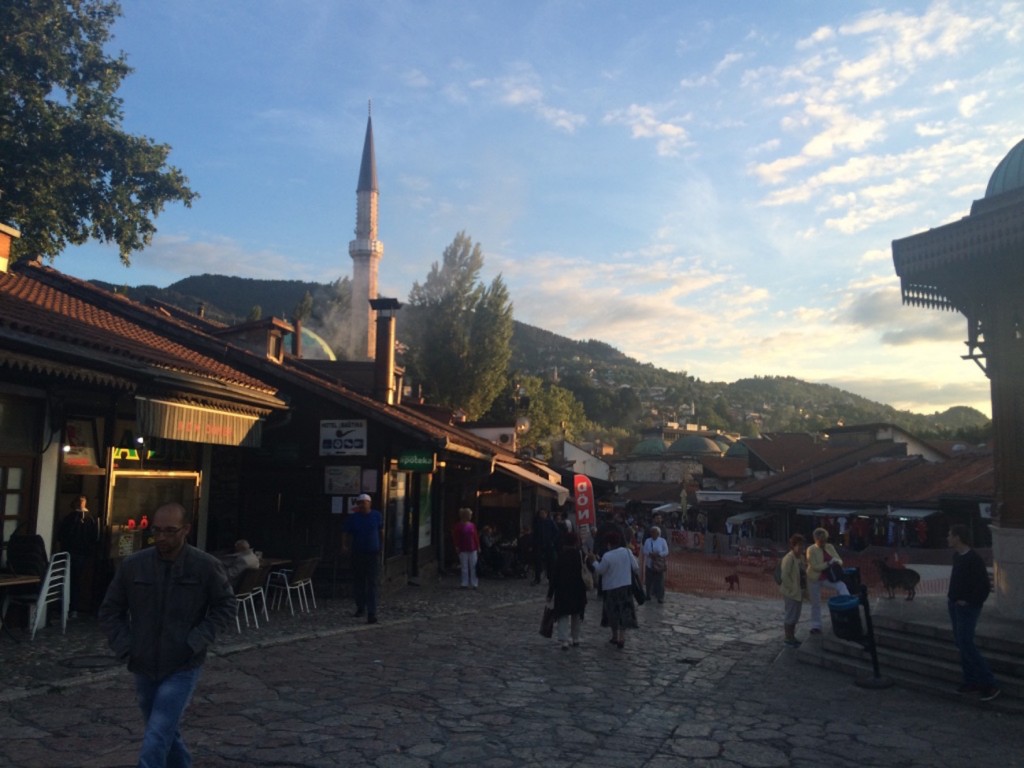 The charming old town has a wonderful maze of streets complete with food stalls and vendors selling everything from designer clothes to tourist-y souvenirs. 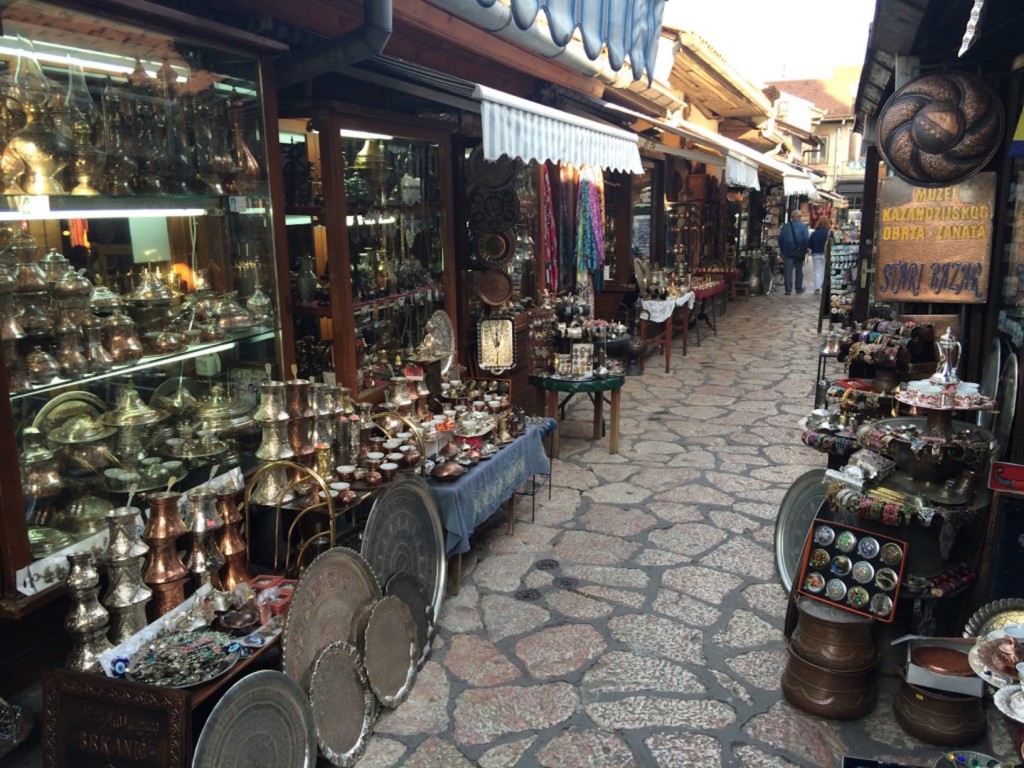 Ok, this one’s a bit touristy… but still charming, no?

We stayed in a traditional neighborhood about a kilometer from the old town.  I know, I know… it might not look like much from the outside, but inside was the nicest and most charming AirBNB we’ve had yet! 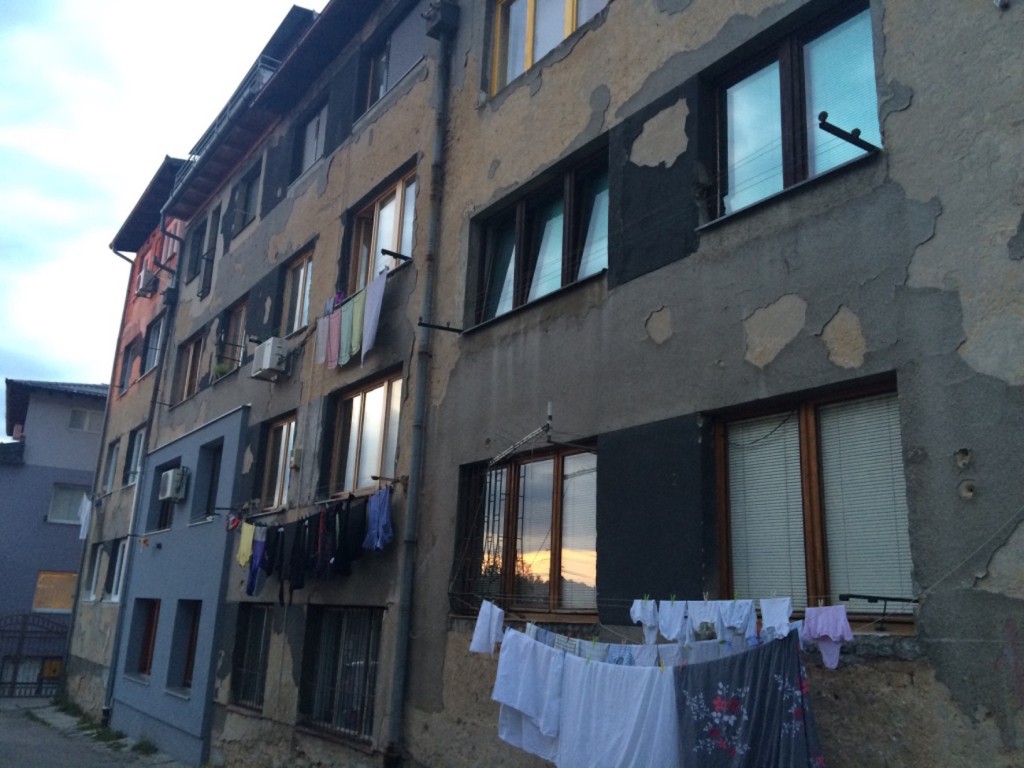 a typical housing block in the hills around old town…

But the best thing about spending some time in Sarajevo is just to start anywhere in town, look up, and start walking: 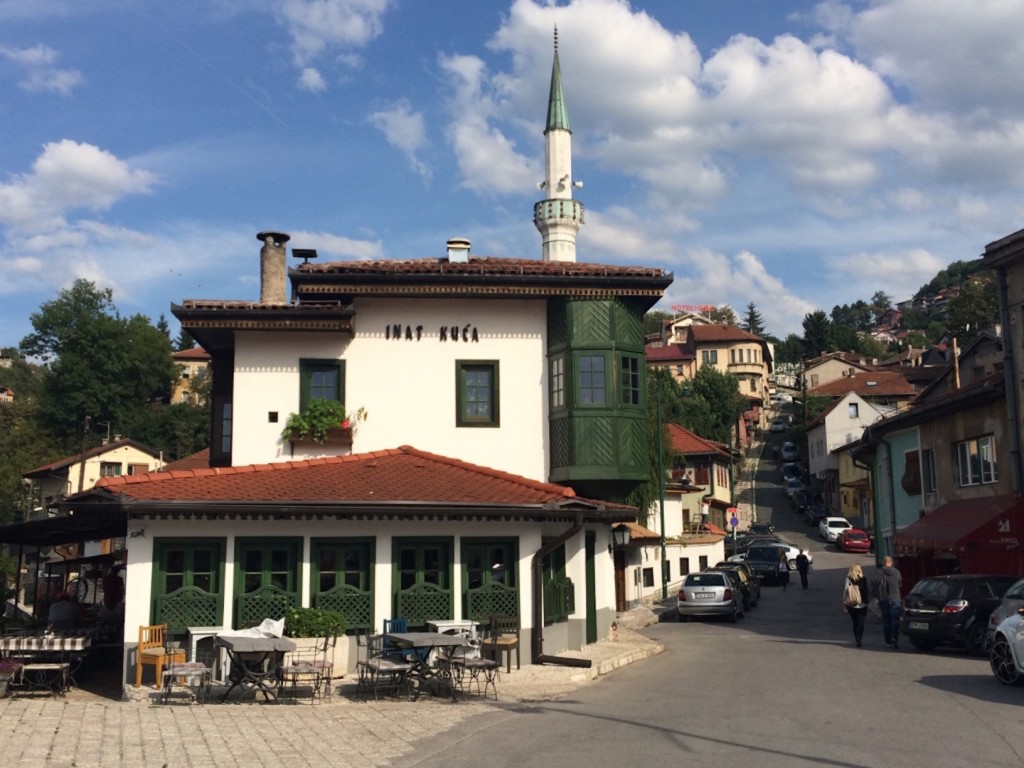 Pick just about any street that heads up… and start walking. 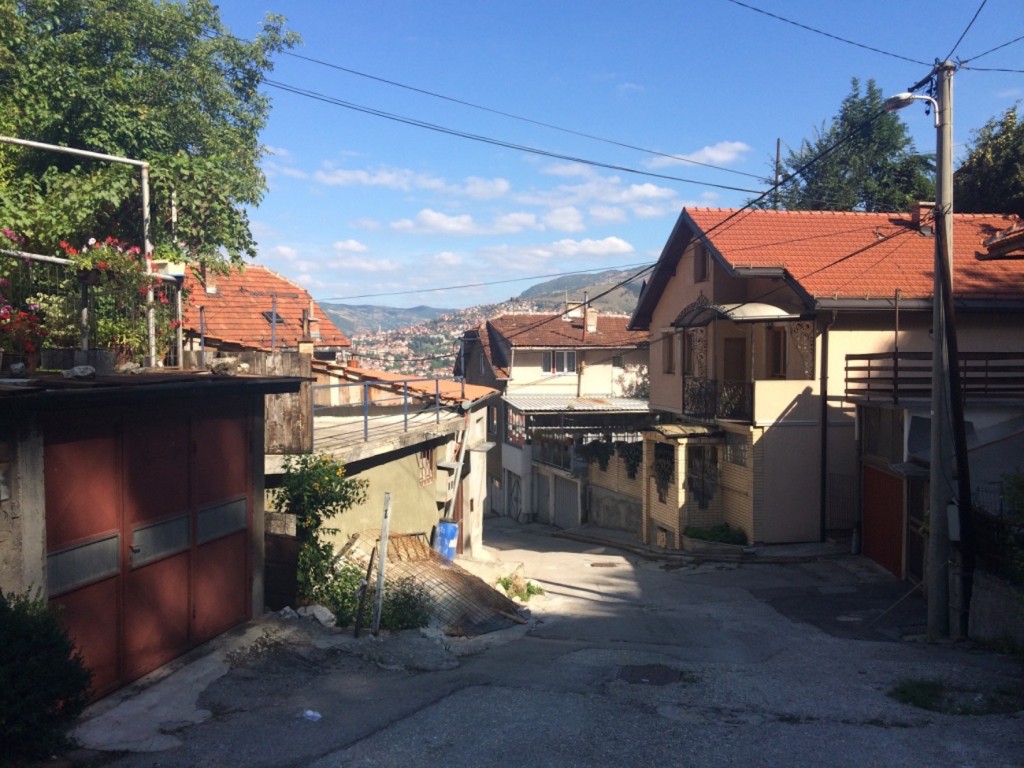 You will find deserted lanes and quiet houses… 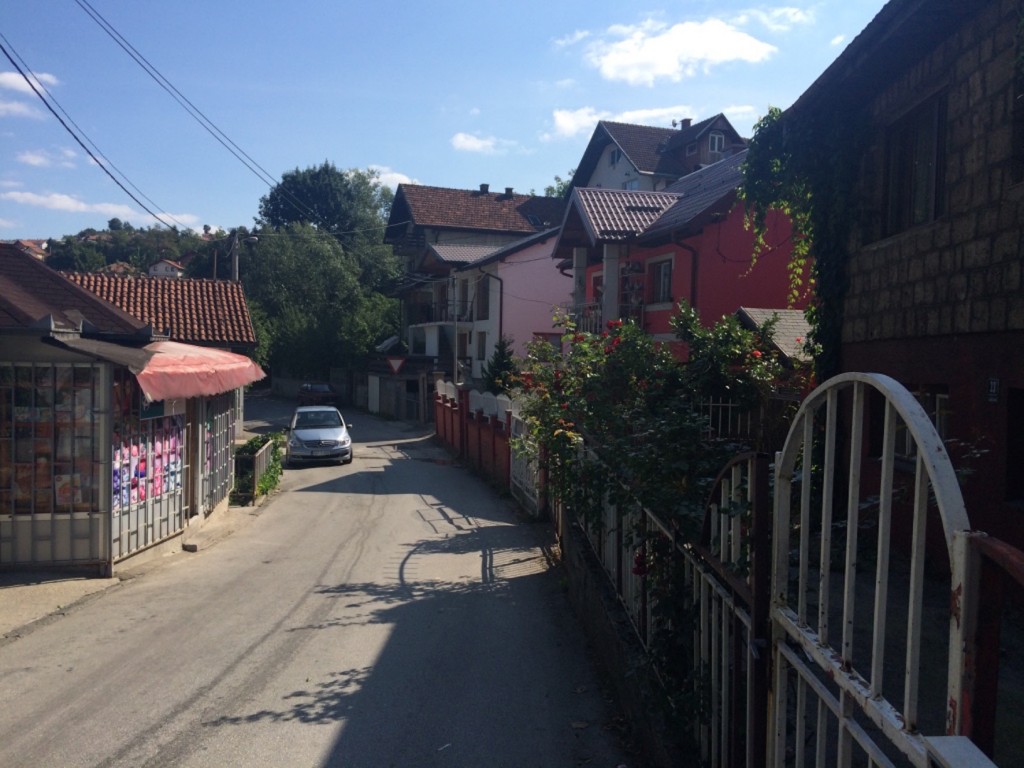 The few places the road levels off – for a minute – will let you catch your breath.

Once at the top.. you will be rewarded with beautiful views in all directions.  Like these: 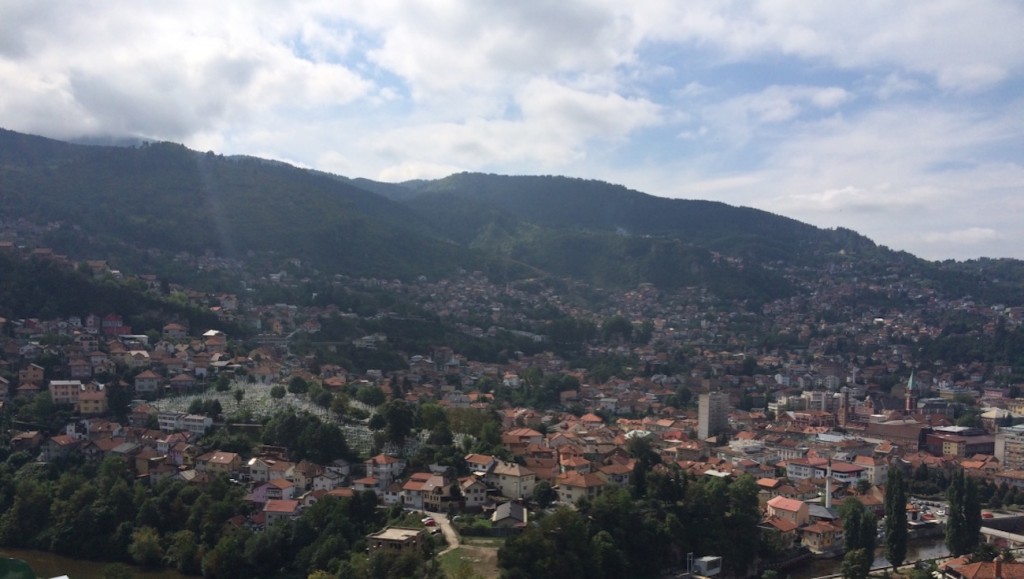 While stunning… note the small patch of white to the center-left. These graves dot the city’s hills and are a constant reminder of the war. 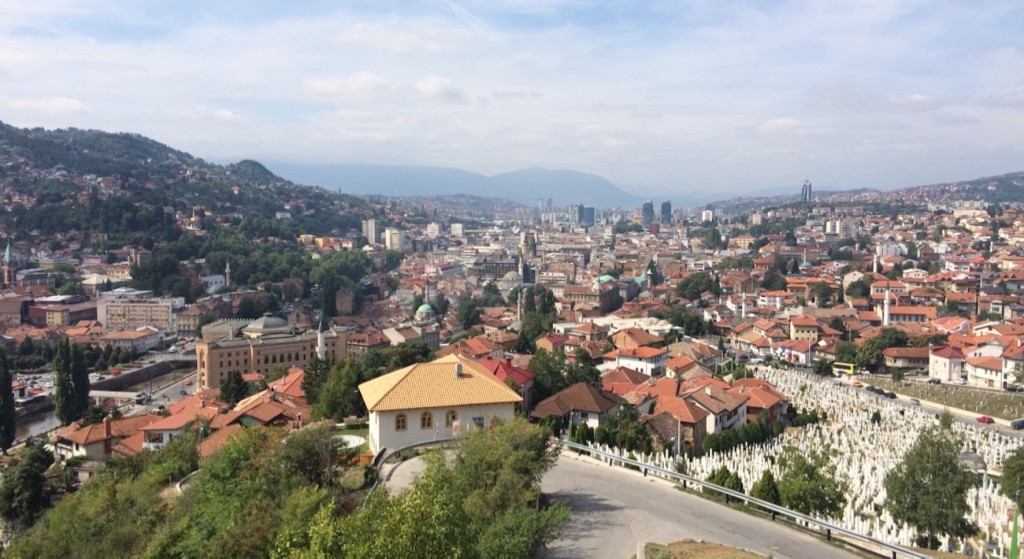 Sarajevo is surrounded by mountains and the city expands along the river valley.

We spent our four days lazily enjoying the city, strolling old town, and taking in a few history tours.  Our last night we opted for one more hill-top stroll.  And boy were we rewarded: 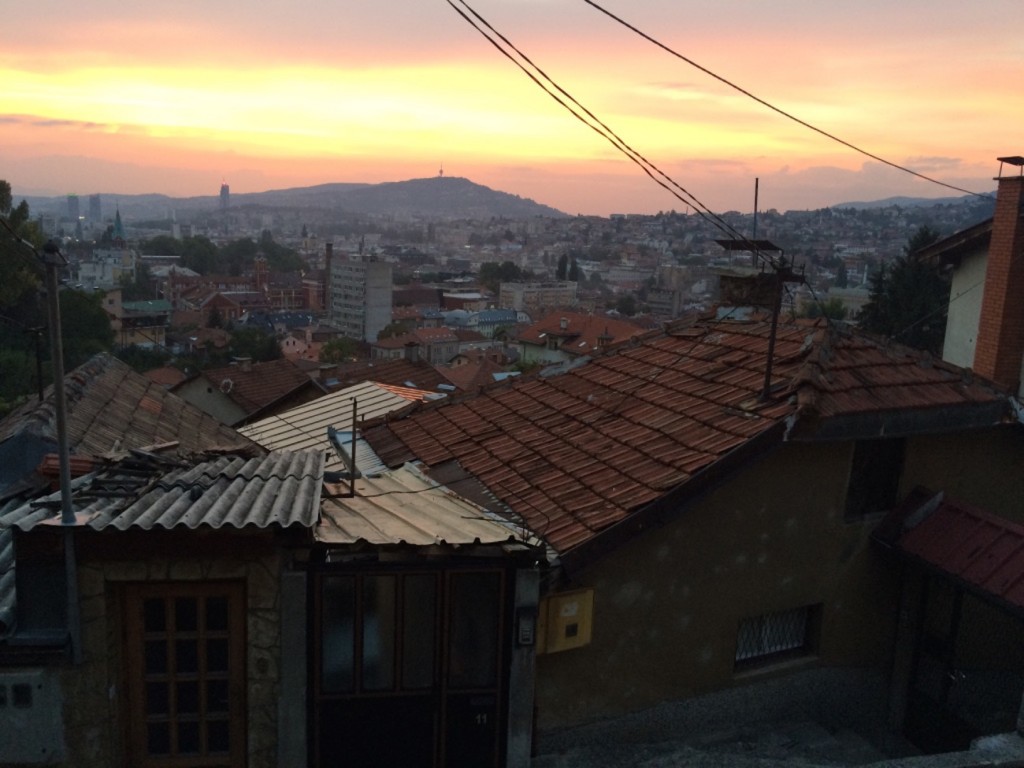 A gorgeous sunset from our neighborhood. Before we started the steep climb.

In other cities we would have been surrounded by tourists at the top.  But for this view we were all alone: 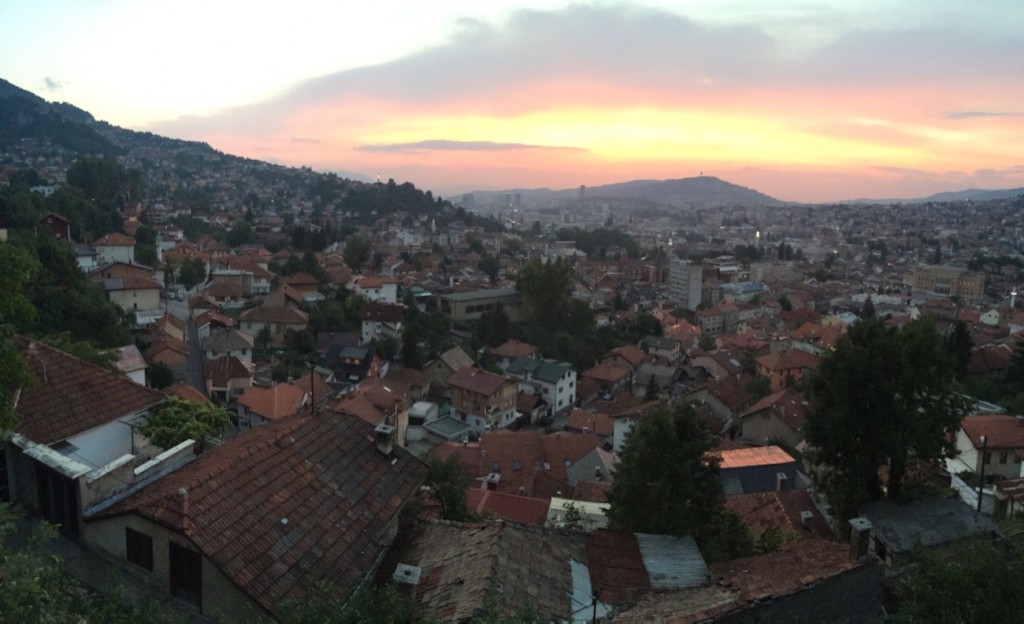 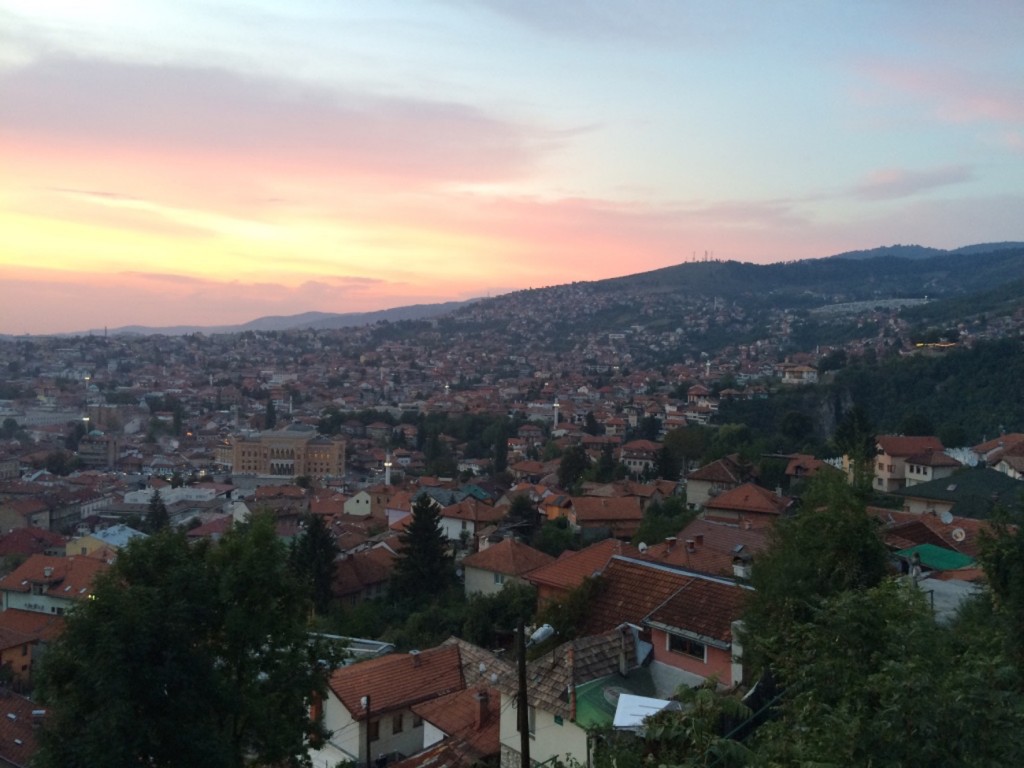 The view from the top reveals the mix of religions that call Sarajevo home.   Synagogues, Orthodox and Catholic churches, and Mosque minarets line the skyline.  We stayed a while and relaxed as the evening call to prayer filled the air:

Such an amazing view.  Almost peaceful enough to make one forget what happened here.