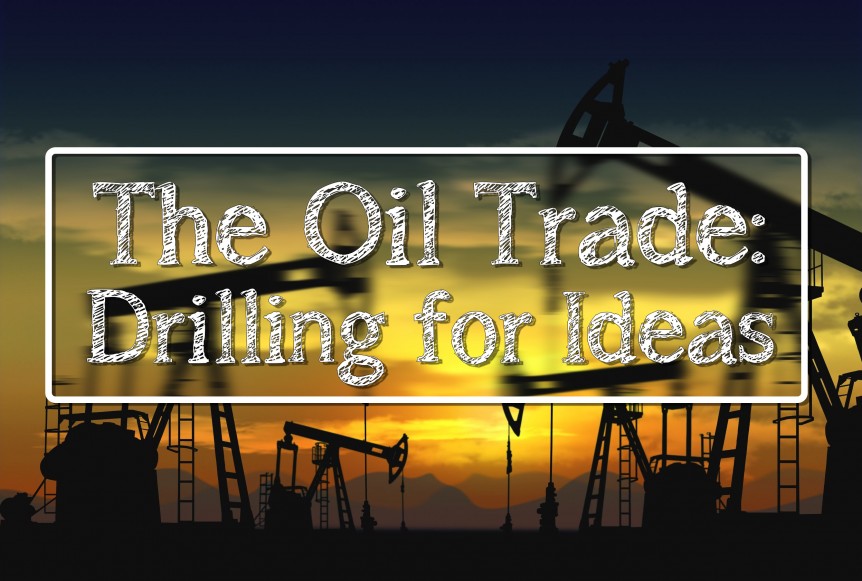 After spending a few weeks in Qatar, Kuwait, and Iran… I spent a lot of time thinking about the Middle Eastern economies and their petro-governments’ dependence on oil.  I’ve been focused on the oil sector for a while now looking for some investment ideas, so I thought I’d try to combine some of my macro and investment thoughts into a blog post. 1<- – – Click this little footnote.

To keep this manageable, we’ll break the post into three parts.  First, we’ll look at the conditions that caused the plunge in oil and got us to where we are today.2  In Part 2 we will examine the two factors that will drive the next phase in oil prices – and the eventual recovery.  Lastly… in Part 3 we shall conclude with our thoughts on how to play that trend.

For purposes of this discussion, the demand scenario is not complicated… it’s been strong.  While you may occasionally read that “global demand is slowing” or see headlines suggest that a slowing China is hurting all commodities… overall global oil demand is not a problem.  The rate of demand growth might be slowing… but it is still growth.

This handy chart from the IEA’s September report shows recent global demand as well as expectations for the next few quarters: 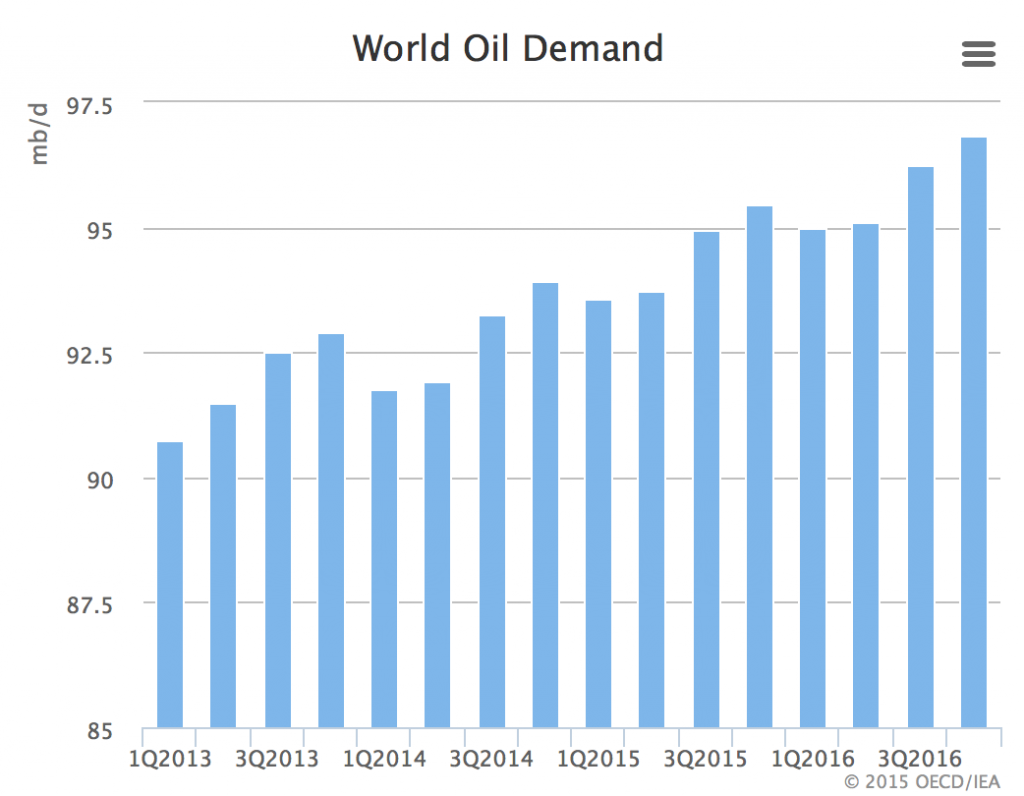 As you can see… demand is still trending up.

So if demand isn’t the issue, then let’s move on to the supply side of the equation.  Because the supply side is where the drama is – and is the reason for the plunge in oil prices over the past year.

Remember the phrase “peak oil?”  Well… if it even rings a bell, you probably last heard that somewhere around summer ‘08 before the Great Recession kicked off.  At that point, the US has still “peaked” in oil production 30+ years earlier, crude futures hit $145 in June of that year, Americans were trading F150s for Priuses3  and there was talk of $200 oil.   The consensus was that permanently higher prices were the new normal and that it would only get worse since we were running out of oil.

But then America said ‘hold the phone’, launched the fracking/shale/tight-oil revolution, and did this to US production:

A:  Until the 1970s, US oil production steadily climbed to about 10m barrels per day.
B:  Then, as the easy to reach oil dries up… production declines to under 5m bbl/d.  Analysts declared that “peak oil” had been reached.
C:  A few years of $80 to $100 oil brings in new capital/entrants.  The “tight oil” revolution gets us almost back to 10m bbl/d.

So that little spike at “C” on the right… that is pretty miraculous.

The US raced back up from 5m bbl/d to over 9m… in less than 5 years.  The “tight oil” revolution and turnaround in onshore American oil production was so strong, that by 2014 the US was close to passing Saudi Arabia in oil production.4  Pretty amazing right?   Hashtag Saudi America.

And then the Saudis abruptly woke up.  And said “Nope…”

Sure… with the benefit of hindsight we can say that the Saudis (via OPEC) shouldn’t have let oil stay so high for so long.  That was the main driver behind the boom in exploration and the shale revolution in the US that caused so many firms to enter the space.  That’s just business 101 right?  High prices and margins in any market are always going to entice new entrants.

Well the Saudis cannot undo that.  History is history.  Those new firms moved in to get a piece of the $100 per barrel action and they started producing a lot of oil.  So somewhere in 2014… Saudi Arabia looked in the mirror and ‘Murica was right on its heels.  The Saudis were losing market share.  Fast.

So what could be done?  Simple… drop the price of oil.  Way down.  Like this: 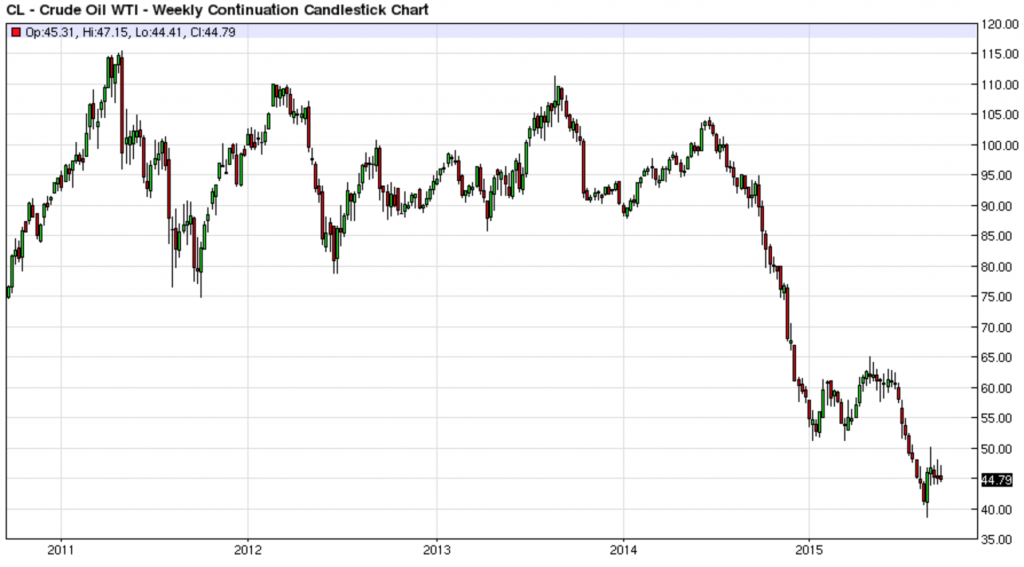 As you can clearly see, the trend of near-$100 oil abruptly came to an end.

So let’s think about the other times over the past ten or twenty years that oil prices have fallen.  What generally happens?  There is an OPEC meeting, they cut production, and the price of oil goes back up enough to make all the producers happy.  Right?  You’ve heard that story plenty of times.

Well not this time.  As the price of oil has plunged… OPEC, in a move led by the Saudis, has voted NOT to cut production.  And as a result, global production continues to rise.  Like this: 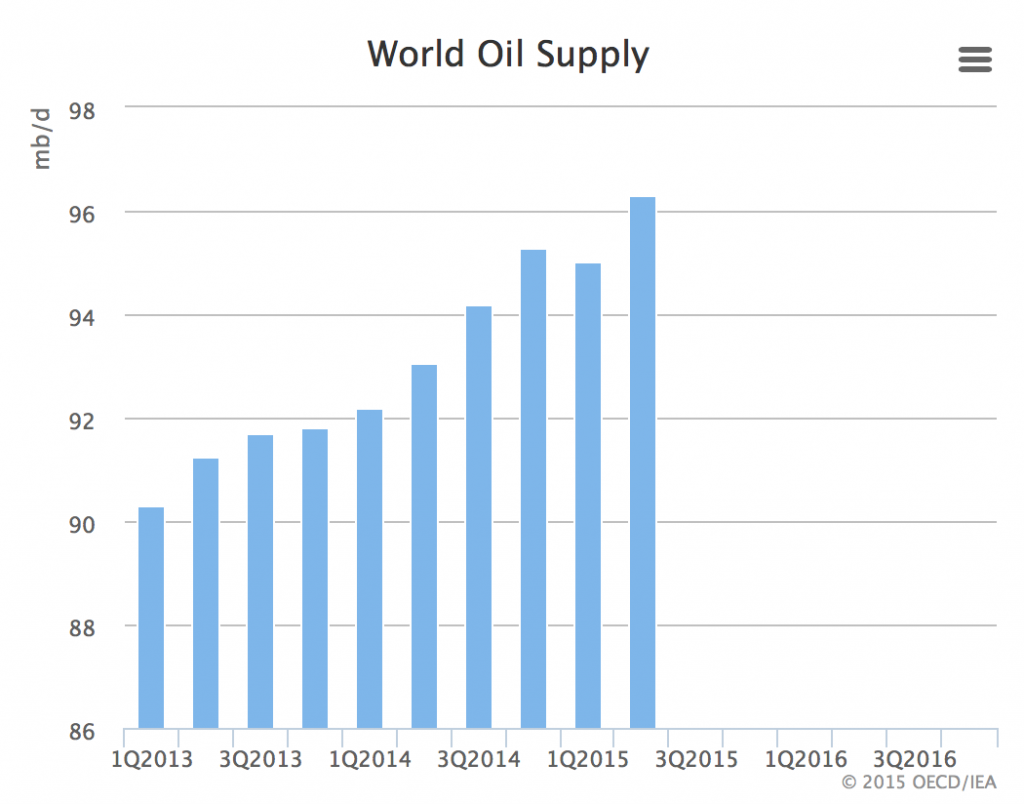 This production glut has been the driver behind the plunge in the price of oil.  The world is over-supplied in oil, and oversupply is the enemy of high prices.

So why doesn’t OPEC just cut production to shore up oil prices?  Like they have done every other time?

Because they actually want low oil prices this time.

For lack of a better way of saying it, the Saudis have declared war on the upstart American tight oil industry.  They have been losing market share and have decided that the best way to get it back is to take away all that new production coming out of America.  And to do so, they want to go all Sun Tzu and bankrupt the US tight oil industry… with a price war.

Now.  Before you start to think I sound like some crazy old conspiracy theorist sitting in a Texas bunker with a shotgun and a copy of End Times Magazine… I’m not going out on a limb here.  I’m not even reaching.  At all.  While this isn’t exactly front page news that has made it to the water cooler conversations… very reputable news sources have been all over this.  Like this and this and this and this.  So it’s not even a cold war.  It’s a very public price war.  So let’s move on.

The Saudi gamble is that they can ride out rock-bottom oil prices for a few years.  And in the process, they will bankrupt the American tight-oil industry, allowing them to regain market share and raise prices again once the goal is achieved.  To some extent, the price war is starting to work.  If we focus on the public companies via the S&P Oil & Gas Exploring and Production Index… that index peaked last summer and is down over 50%: 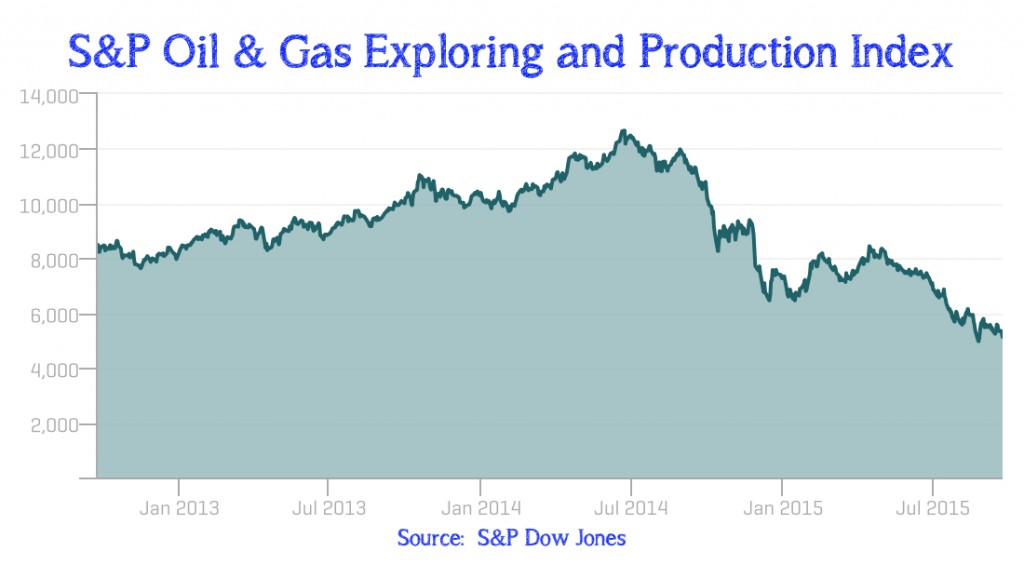 And it is highly likely that smaller, private companies are faring much worse.  The financial pressure on the sector is really starting to build.  As the FT reports, over a dozen US oil production companies have already defaulted on debt this year… with several filing for bankruptcy protection.  The largest was Samson Resources – which made waves as this was a huge $7.2 billion takeout in 2011 by KKR.

So at the surface, it seems as though the Saudi gamble might be working.