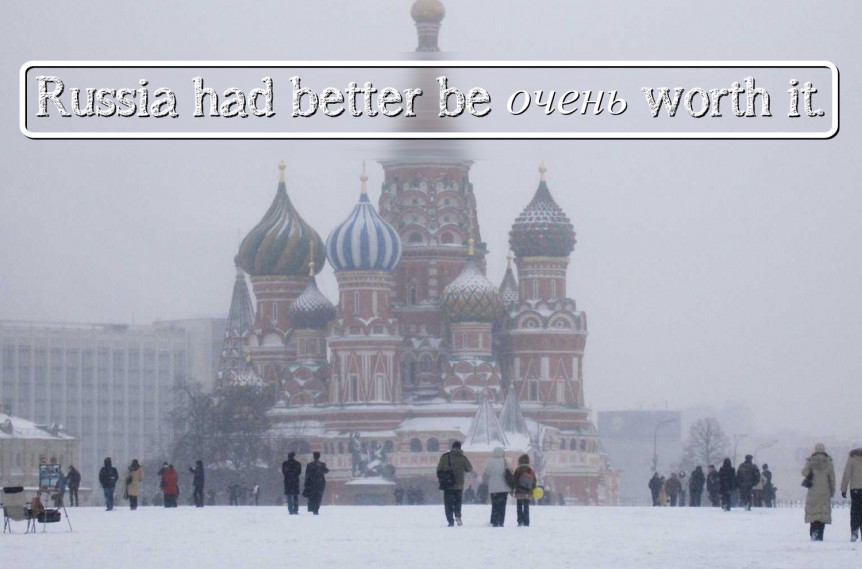 So Russia had better be очень worth it.

After a few weeks, a lot of stress (at the beginning), and $700-ish dollars, today we received our passports back from the Russian Embassy… complete with newly-issued three-year multiple-entry tourist visas!  To sum the whole thing up, getting a Russian visa is an exercise in knowing when to hire a professional.

Initially we spent a very frustrating week trying to handle the entire Russian visa process ourselves before deciding that for these visas it wasn’t worth the hassle. Had we tried to obtain these completely by ourselves… I imagine that it would have been about as easy to get our visas as solving a Rubik’s Cube. Blindfolded. With one hand. Whilst being chased by a bear. Through a Siberian forest. In the winter.

Ok, maybe not all of those things. But getting Russian visas wasn’t nearly as easy (or efficient or cheap or pleasant) as getting our Chinese visas. You see… the only complicating factor in obtaining our Chinese visas is that you have to provide proof of entry and exit to/from China (i.e. give them your airline tickets to prove the duration of your stay and means to exit China). If we were planning on visiting China later in our trip, that would have been a problem as we wouldn’t yet have airfare booked. But in our case China (specifically Beijing and Xi’an) is our second stop. So I printed our airfare/hotel confirmations, dropped our passports and the visa applications at the Chinese consulate in Chicago, and four days later picked up our passports with the visas attached.

To obtain a Russian visa, you must have an official invitation from an official tourist agency with an official “register number from the Uniform Federal Register of the Tour Operators of the Russian Federation’s Federal Tourism Agency.” Said differently, one cannot simply print the Marriott hotel confirmation from your gmail.  From what I can tell, most tourists who are less crazy (or budget conscious) than Lauren and I simply pay a fee for an official tourist agency to print them an invitation with the required information (and register number).  In our case, thinking this was an easy way to save a hundred bucks, we contacted our hotels directly and asked them to issue us the required invitations. Which they did.

Russian visa applications must be submitted in person to the Embassy or Consulate for your region in either D.C., New York, Houston, San Francisco, or Seattle.  The first time our applications were submitted, they were rejected because apparently one page contained a typo in Lauren’s invitation information, which I missed (or mis-translated). The second time the Russian embassy flat out rejected the package by saying something along the lines of “why do you have so much paper.”  The issue was that we had multiple hotel confirmation numbers due to the mix of hotels that we paid for and miles/points nights. That’s what we get for doing that part ourselves rather than having TDS arrange them.

Fortunately all those rejections didn’t result in lost time because it was not Lauren or I dealing with the Embassy. We used Travel Document Systems for our visa applications and – once they took over the process – they skillfully navigated the details for us, including the rejections.  We mailed TDS our passports, applications, photos, and cover letter and they took care of the rest.  They walked them over to the Russian Embassy in D.C, informed us real time of the issues/rejections, corrected the problems, then returned our passports complete with Russian visas back to us via overnight mail.

If you are in need of a Russian visa, TDS has a great page listing the steps one must follow.  The cost of a Russian visa is $198 per person, and most agencies charge around $100 (as TDS does) to handle the submission process for you (plus return shipping).  They will also arrange the “official tourist invitation” that we had initially tried to skimp on for $65 each.  Realizing that we were creating more work than was needed by obtaining our own invitations from the various hotels, we bailed on that idea and had TDS do this for us mid-process (which they did in less than 24 hours).

We highly recommend Travel Docs for your visa needs – we get no commissions or bonus or anything for our recommendation… just a good old fashioned wish to show our thanks to them by giving a positive review.

Because… had I gone to the Russian Embassy myself to do all of this, one can only assume the result would have been a complete disaster as the only Russian I know comes from The Hunt for Red October.  Which I decided to play out for you in the following section.

Note: for this next part, we suggest clicking this link and letting that song play whilst reading my short film.

Had Christopher Gone To The Russian Embassy To Get The Visas Himself:  A Hypothetical Short Film.

Fade In.  An all concrete room.  There appears to be only a single customer service window.  Dozens of visa seeking hopefuls sit in hard metal chairs.  A single Russian flag waves slowly in the corner despite the fact that we are indoors.  The sound of a slowly dripping faucet can be heard in the distance.

Russian Embassy Girl:  “Sir, there seems to be a problem with your application.”

Russian Embassy Girl:  “No, I’m saying that you need to make some corrections before we can issue you a Russian visa, Sir.”

Russian Embassy Girl:  “Sir.  I would suggest that you come back with someone who speaks Russian.  Or English for that matter since that’s what I speak.”

Christopher:  “Sonar/Con.  Verify our range to target.  One ping only.”

Russian Embassy Girl:  “Sir what you are saying makes no sense.”

Christopher:   “One ping only, please…”