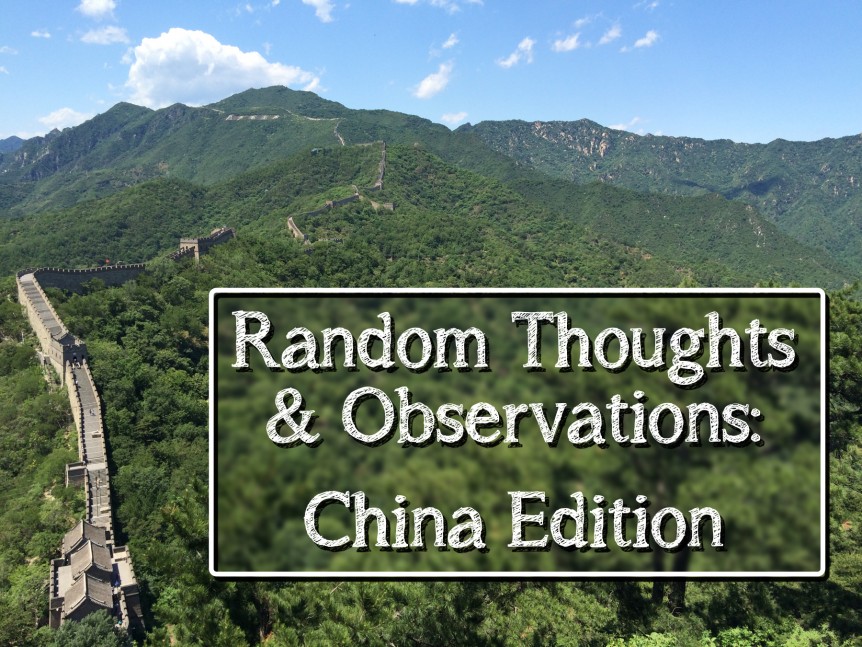 So as I did for Japan, I wanted to throw out a few random thoughts and opinions from our time in China.  As we are walking around, shopping, researching, or whatever else is going on… I try to take little notes of the times when one or both of us says “that’s cool” or “that’s weird.”

So here goes for China.1<- – – Click this little footnote.

It thought this would be a good way to introduce the language barrier issue.  Obviously neither Lauren nor I speak Mandarin, Cantonese, or any other Chinese dialect.  And while we didn’t in Japan either, more people spoke English or at least enough to get us through random daily activities.

Not so much in China.  Which is how I almost started an international incident when I totally bottlenecked the check-out line at a supermarket at rush hour in what I believe is2 referred to in the Chinese Media as The Great US-China Banana Incident of 2015.34

So it started out innocently enough.  I went to the supermarket to get some coffees, bread, and fruit for breakfast.  We had been to the same market once already5 so I thought I’d be good.  I went to the banana section and there were basically two choices.  A huge thing of twelve bananas wrapped in shrink-wrap or a huge thing of twelve bananas not wrapped in shrink-wrap.  But I only needed two bananas, so I broke two off and headed to check out.

After waiting about 15 minutes to get to the front – because it was crazy busy – the nice guy behind the counter first scanned my two canned coffees6, the bread, and… then he got to the bananas.

Had I placed a severed head on the conveyor belt he couldn’t have looked more angry.  He picked them up and said something to me not in English that had WAY more syllables than are needed in ANY language to say “do you know how much these were, sir?”7

Naturally, being the culturally-sensitive world-traveler that I am… I immediately started saying “sorry I don’t understand” and “what’s the problem” while looking horrified myself.  Then the guy did exactly what you would expect and I hoped would not happen.  Repeated himself loudly.  And I don’t think him shaking the bananas at me was a good thing.

Christopher:  “Look, those bananas were $0.10 each and I realize now I shouldn’t have broken two off so why don’t I pay you for all twelve as a gesture of goodwill between our nations…?”

…is what I should have said.

Instead I just kept saying “no, nevermind” and “sorry” until he put them down and I paid him for the other things.

I don’t even know what happened next because I exited stage left faster than you can say “hey stupid, these are not for individual resale” in Chinese.

Remember how I was so amazed at the formal, polite, flawless straight-line queuing that takes place in Japan to board a train.  Yeah.  We are not in Kyoto any more.

When a train stops in China and the doors open the process is more like a Mad Max film:  post-apocalyptic every man for himself no-holds-barred free-for-all.  As if this is the last train taking those that will be humanity’s only survivors away to safety.9

I totally get that in a country with 1.4 billion people, personal space isn’t as much of a thing… but it definitely took a day of getting used to.10

But the Chinese government must know this is becoming an stereotype, so they’ve started an ad campaign and put these posters all over.11 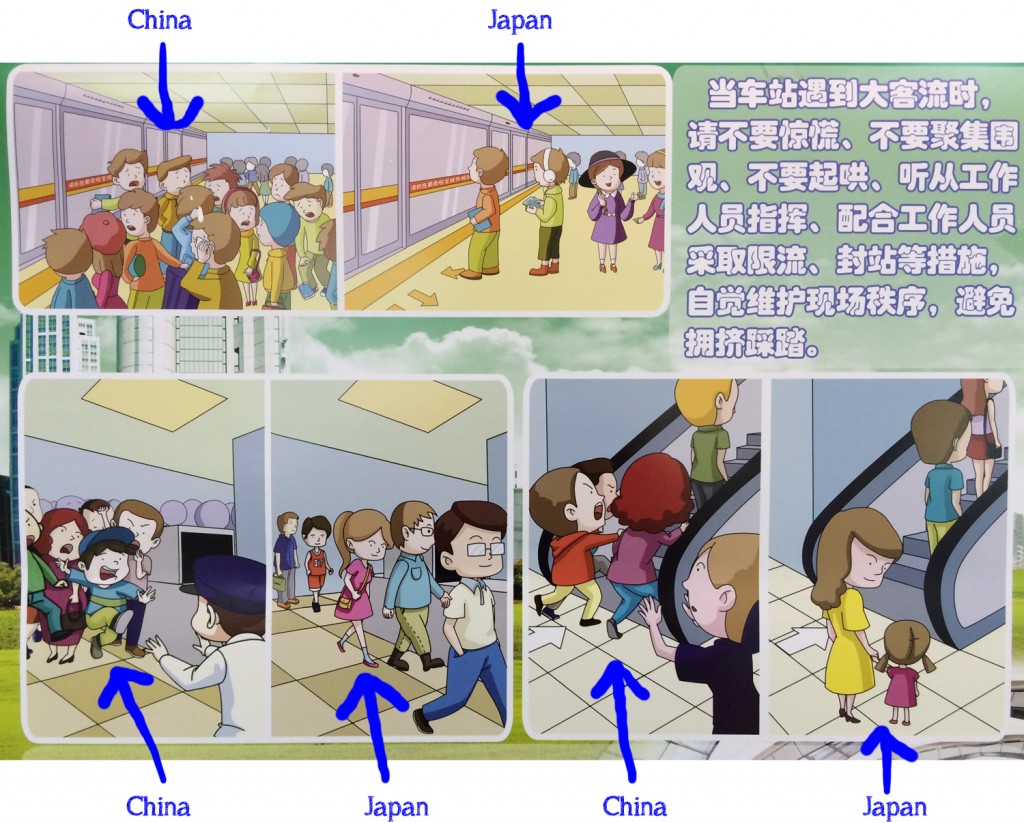 I really enjoyed China, generally love the country, and respect like crazy how hard working and dedicated to success everyone is.  But.  I had to comment on this because the pushing/shoving thing is nuts.  Moving on.

3) When it’s hot out, I guess it’s socially acceptable to air out your back and belly.

I didn’t want to be taking a lot of random pictures of dudes with their shirts rolled up, but I’d say on average we’d see about 5 to 10 people a day do this: 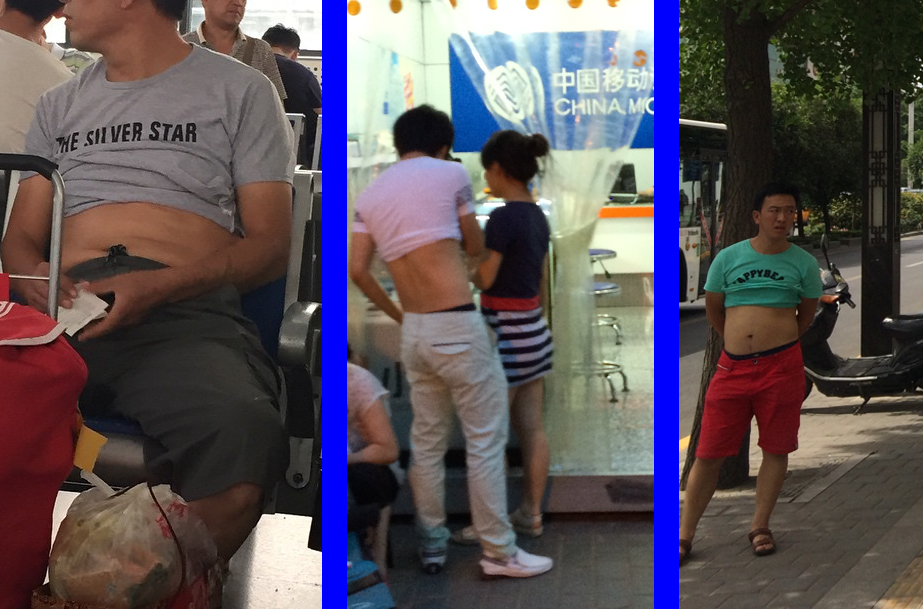 Sure, 10 per day isn’t exactly an epidemic, but I found it interesting.  And no one else on the street seemed to care.  It was hot out.  Maybe it’s genius?

Ok, so this is the tomb of China’s famous leader Mao Zedong… 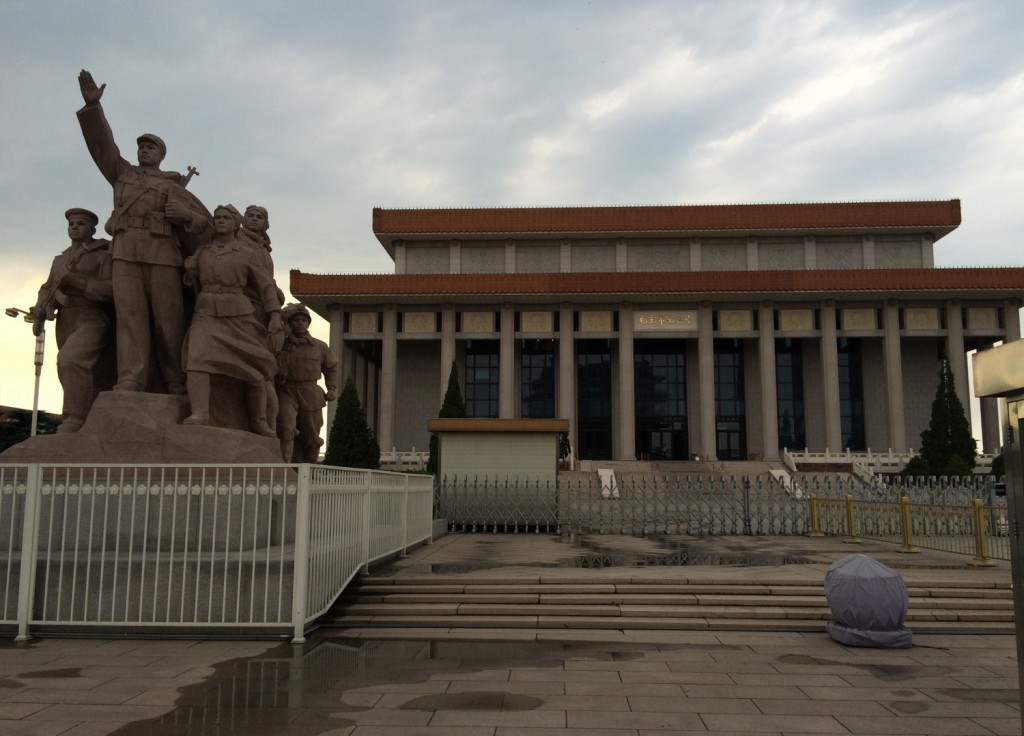 …At which this conversation happened:

Here’s the thing.  If someone writes out something in Japanese phonetically for you in English… you’ll probably be able to get through it.  Like this:

You read konichiwa in your phrase book.
You say: “Ko-nee-chee-wah”
A Japanese person smiles and nods at you being polite and trying to speak his/her language.13

Mandarin/Chinese, however, is so very “tonal” that slightly altering your voice will change the word.  Seriously you have to be careful.  I’m pretty sure I was told that if you pronounce the word “ma” incorrectly you can be saying either mother or horse.  I think.14

And we really really tried to pronounce some things.  With dismal failure.  I won’t write the whole conversation out, but what follows is an actual verbatim conversation that Lauren had with a nice lady on the plane next to us who was trying to teach her how to say “thank you” in Mandarin.  It’s Xièxiè which to me sounds more like “Shea Shea”15

Anyway and seriously.  That was a 10 minute conversation.  I swear I actually paused my iPod music to listen to the whole thing unfold.16

5) People will just show you something rather than fight the language barrier to explain it.

I don’t have a picture of the observation to go with this one… but I think since the language barrier is so steep, sometimes if we asked something…. the person would just “do it for us” rather than try to explain to us.  It was kind of efficient and skipped past the part where we both feel awkward about the language barrier and being unable to communicate.

For example, on a bus ride Lauren tried to ask the ticket lady if she needed to buckle up.  I’m guessing the lady knew we wouldn’t understand whatever she said, so she just moved Lauren’s arms and buckled her up two-year-old style.  Efficient.

Then more than once we’d get a bowl of noodles set in front of us17 and there would be some small sauce bowls placed on the side.  Lauren and I would debate whether you should dip in it, pour the whole thing in, or other.  When we asked what to do,18 the server would literally take the chopsticks from our hand, pour in the side dish, stir the dish for us, mimic moving noodles from bowl to mouth, put chopsticks back into our hand in the same position since our hands hadn’t moved, and then walk away.  We didn’t move the whole time and were like “well ok then.”  Definitely efficient.

Oh, wait… I found an “after” picture of one of my awesome noodle dinners.  No joke the server poured all this in for me when I tried to signal “what’s that side bowl for?” 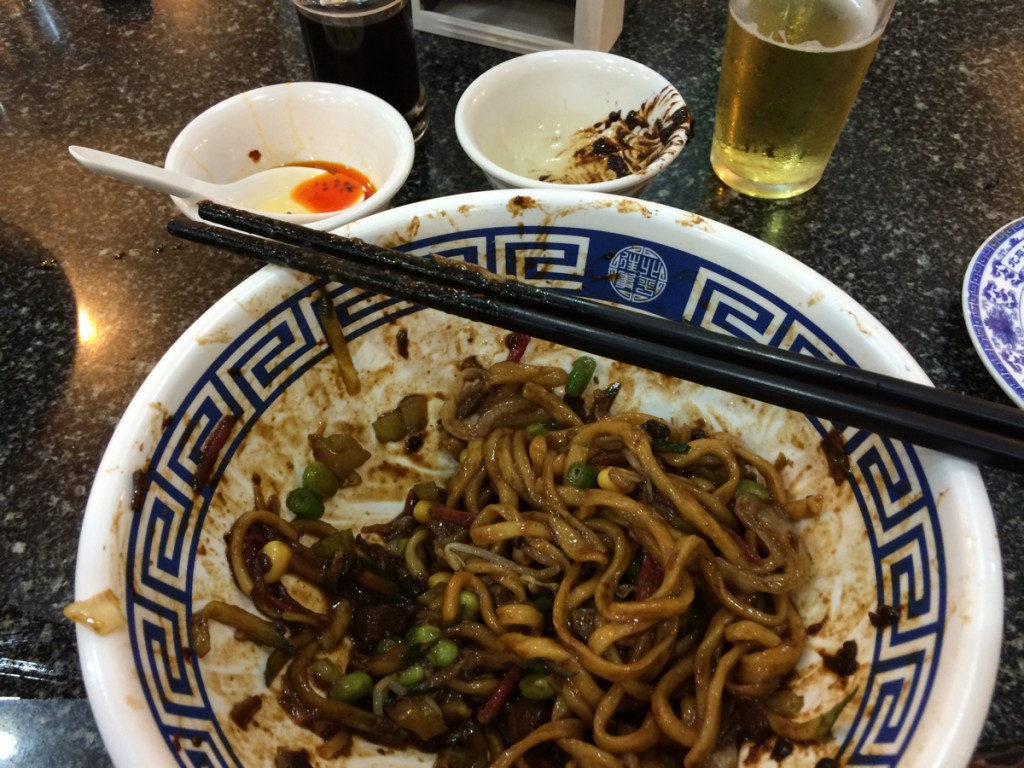 6) Security is no joke for the subways and tourist areas.

Ok, this might just be a thing because we spent so much time in Beijing… but there was serious airport-like security in the subways and entrances to all tourist areas.19  This was a checkpoint complete with x-ray bag scanners to get on the subway: 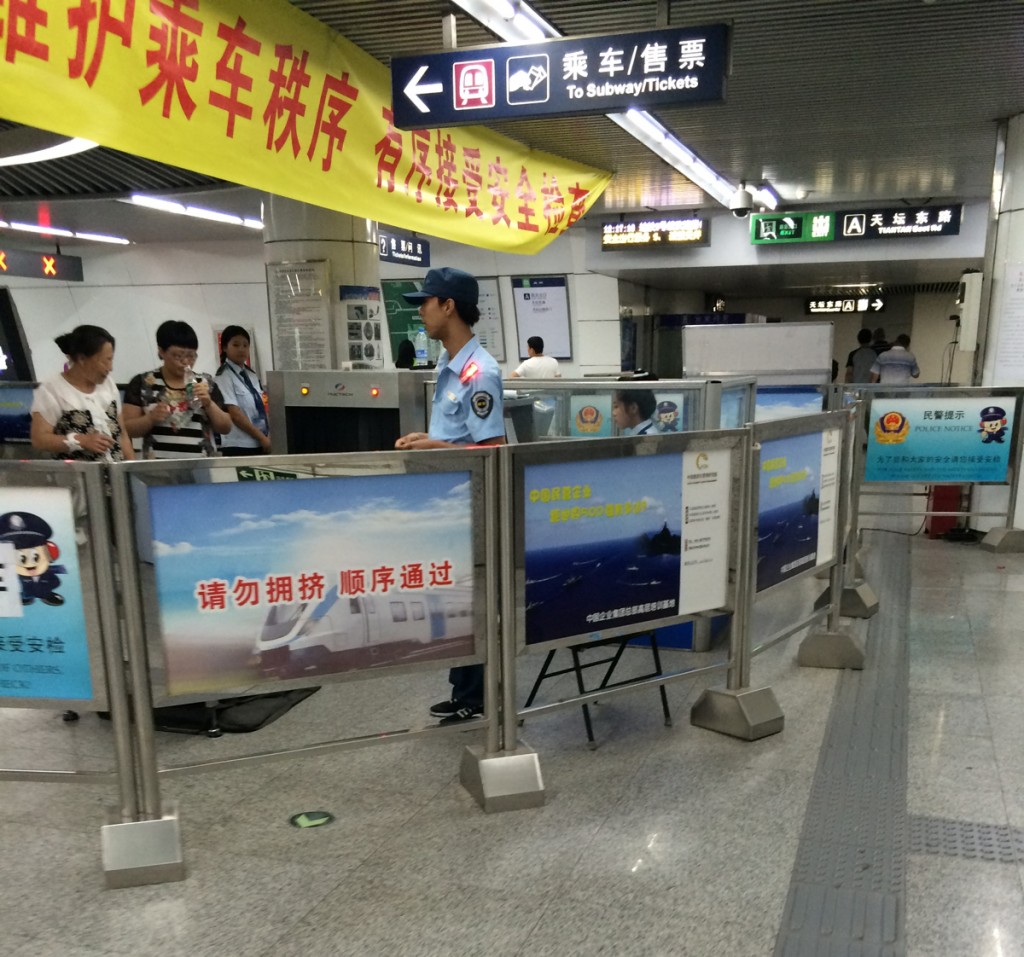 There were a lot of posters in the security areas (like those “please queue and board politely” ones) where I guess the government was trying to put a friendly face on all the security procedures.

I think they were shooting for something kinda like those adorable signs everywhere in Japan’s subways… only the result was a bit less so since there are no kittens or baby pandas.  Here’s an example: 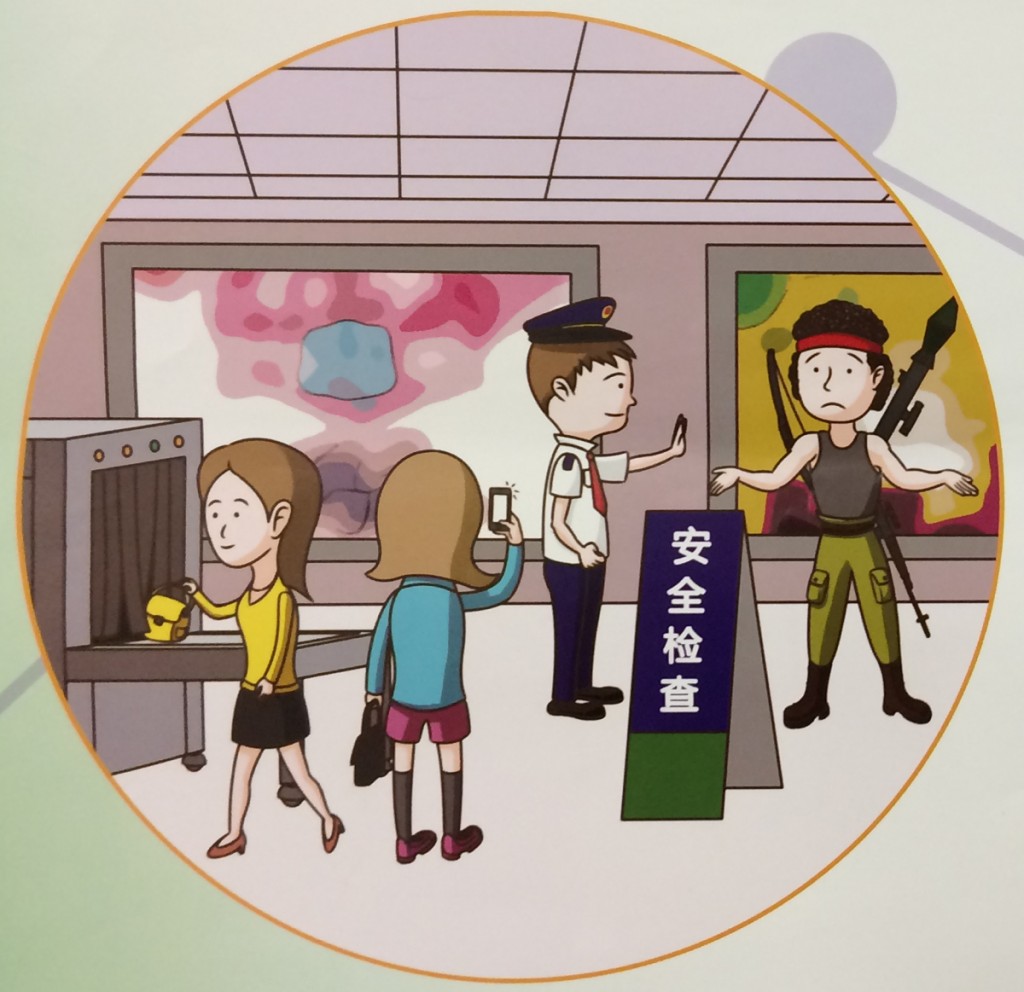 In case you can’t read the characters on that sign, I’m pretty sure it says “Sorry, Rambo.  We don’t allow bows-n-arrows, assault rifles, or bazookas on the subway.”

Oh, and why is that chick in blue taking a picture of it?  HAVEN’T YOU SEEN RAMBO?  Run the other way, lady, the dude is obviously dangerous!  Maybe there should be second sign saying “don’t take selfies with dudes with bazookas.”  Anyway.

Here’s another attempt at a nice cute one:

In case you can’t read that one either, I’m pretty sure it says “hey stupid, don’t smoke whist standing next to canisters of poison or dynamite.”  But shouldn’t it go back to the security checkpoint part and say “don’t bring in poison or dynamite” to begin with?  I was very confused by this one.

Oh, and it would be way more effective with some baby owls and a cute rabbit with glasses, Japan-style, no?

I first noticed this on a trip to Shanghai a few years ago.  They had torn up “the Bund” for restoration.20  Since the Bund is a very important area, obviously China wanted to get it finished.  Every time I passed – at all times of the day – crews of dozens of workers were working amazingly hard and moving so fast.  No one was standing still and I couldn’t help but compare that to basically any construction crew you see in the US where there’s maybe one guy working21 while about 9 guys stand around.  If I was a taxpayer in China I don’t think I’d ever pass a construction crew and make a sarcastic remark about “my tax dollars at work.”

Anyway… I noticed that hard Chinese work ethic on my first trip to China, noticed even more so during my 10+ years in the corporate workforce dealing with offices and employees both in and from China, and most recently noticed it again on this trip.  I do believe that a super-hard work ethic is a cultural trend that is engrained into China’s young workforce.  They are hungry for success.22

So that “never sit still and work as hard as you can” trend is definitely a thing in China and I really respect it.  While our millennials in the US are whining about wanting to sit on a bouncy ball at their desk, need ping pong tables in the office, and prefer to wear jeans and flip-flops… their Chinese counterparts don’t care one bit about that crap.  They just want to work as hard as they can.  That’s what today’s college grads in the US are up against.  We can press for more work-life balance and a four-day work week if we want to… but China will keep working like crazy.23

I recall reading somewhere an old Chinese proverb that states “No one who works from sunrise to sunset ever fails to make his family rich.”  They seem to believe that in China.  And I’m impressed.

Seriously… China is going to own the 21st century. 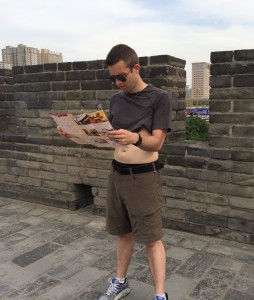