When embarking on a year long around-the-world trip, it would obviously be helpful for one to know a second language.  And so while planning our trip… Lauren and I decided it might be cool for us each to try to pick one up.  She chose Spanish.  And I chose Arabic.  That was over a year ago.

Flash forward to present day and of course my-wife-the-natural is crushing it and is on disk 987 1 of her Pimsler Spanish CDs.

And… I think I maybe kinda sorta stopped somewhere on CD 4.  About a year ago.

So.  Is this the post where I boldly praise my lovely wife’s amazing drive, ambition, and talent for languages… publicly acknowledging her dominance at anything study-related while also promising to start doing my Arabic homework?

Because rather than spending my five-plus hours flying from Bucharest, Romania to Tbilisi, Georgia listing to Arabic lessons in an effort to catch up with her… I instead am writing a blog post about the completely stubborn and childish way that I intend to respond to being schooled by my wife in the race to learn a second language.

By introducing you to what shall hereinafter be referred to simply as…. The Bet.

So the story goes something like this: about six weeks ago, Lauren was doing her daily Spanish lesson2 and was having some dorky conversation with her artificial CD-friend, played by the Pimsler person.  Not understanding much (if any) Spanish, at best I would occasionally catch a few Spanish words like buenos, or cómo, or qué, or whatever.  But then she said the following:

And somehow I suddenly understood Spanish for those four seconds.  And, like a lion who had cornered a gazelle, I pounced.

“Did you just ask someone for a cassette tape?”  I yelled excitedly from the other room.  “A CASSETTE tape?”  Her silence meant that I had her! 4

Now.  At this point… Lauren realized I was all excited about something, so she paused her lesson and began to explain the situation to me.  I don’t actually recall what she said because I was so excited about my revelation that her Spanish would now be most helpful not on our trip to South America…. but rather whilst watching a rerun of Saved by the Bell dubbed for Univision.

I’m pretty sure she probably calmly explained to me something along the lines of “the actual word isn’t important because I’m learning grammar, tense, and pronunciation and work on my vocabulary building separately.”  So I nodded my head.

“Ok, baby.  That makes total sense.  Sorry that I misunderstood the purpose of your lessons.  Please carry on.”

…is what a less competitive husband would have said.

But oh no.  I doubled down.

…by breaking out the only Spanish that I know!

In the 2008 James Bond film The Quantum of Solace,6 Bond finds himself in Bolivia – against orders – and a local, low-ranking agent for MI6 named Fields 7 is charged with keeping Bond under watch until he can be put on a plane back to England.

Fields escorts Bond to a very run down hotel and proceeds to book a room as the next flight to London isn’t until the next day.  Bond takes one look at the dirty, decrepit, on a good day one-star motel and heads back to the cab.

“You’re going nowhere!” Fields demands.
“So shoot me. I’d rather stay in a morgue.” Bond counters.
Fields then explains that “We are teachers on sabbatical; this fits our cover.”
To which Bond replies, “No it doesn’t… get in.”  And they get back in the cab.

Cut to the cab pulling up to the super luxurious Andean Grand Hotel, where Bond confidently strolls up to the desk, smiles, and says:

“Somos maestros en año sabático… y ganamos la lotería.”
(“We are teachers on sabbatical… and we have just won the lottery.”) 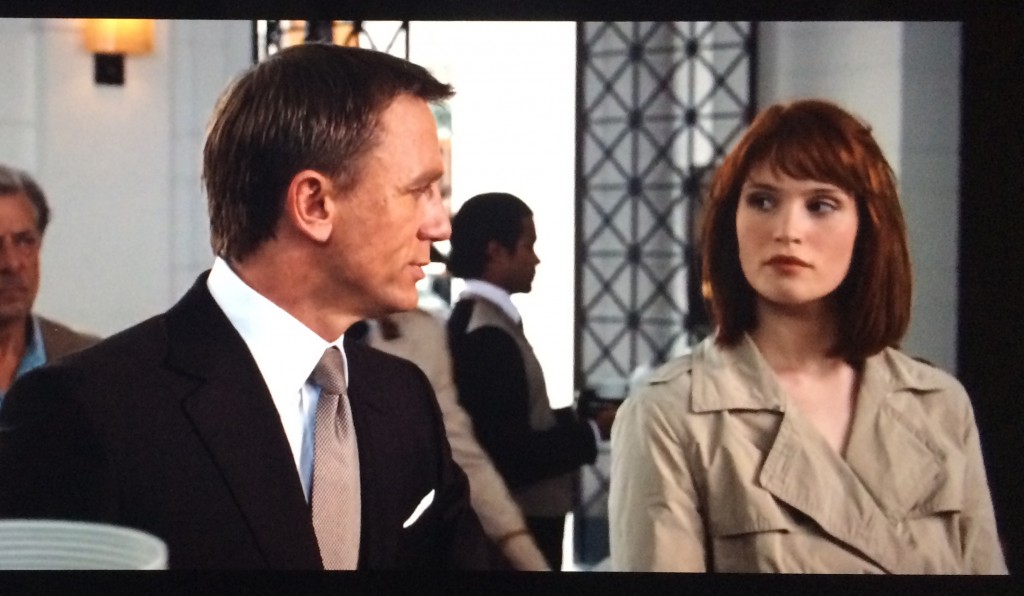 And so getting back to her mix-tape phrase… I proceeded to explain to Lauren that her cassette phrase was just plain silly.8  That I had a better chance of using in actual conversation “We are teachers on sabbatical, and we have just won the lottery” than she did with “Do you have a cassette tape of the latest hits.”

In fact, I was pretty sure of it.  Naturally, Lauren continued to attempt to convince me that I was still missing the point, but of course that mattered not.  Because I had thrown down el guantelete.9

Which brings us to present day.  A battle of real-life language skills.  Mano-a-Redheaded-Mano.  Lauren’s 1980s “mix tape” phrase versus my suave “teachers on sabbatical” line.

And so during our time in Spanish speaking countries… we shall keep an official log of the number of times that each of us successfully delivers our line.  Our first chance will be two separate 3 day stopovers in Madrid, Spain in between our Morocco and Jordan visits.11

So the terms are simple.  Each successful delivery of our phrase whenever possible and practical is a point.  Which brings us to the stakes.

When something as important as husband vs wife pride is on the line… the stakes could not be higher.12  But just for good sport…. we 13 also added that the loser will accept a new pajama/sleep shirt with the other’s phrase.  So as to never forget which line was better!

Oh, and since I’m obviously going to win…14  please click here to see what Lauren’s shirt will look like.

Because I’m a nice guy, I’m going to get seven so she will have one for each day of the week.15

And so, dear readers, step right up and place your bets.  Whether you support #TeamLottery or #TeamMixTape…. I’m sure the race will be exciting.

Because we are teachers on sabbatical… and we have just won the lottery.16 17 18