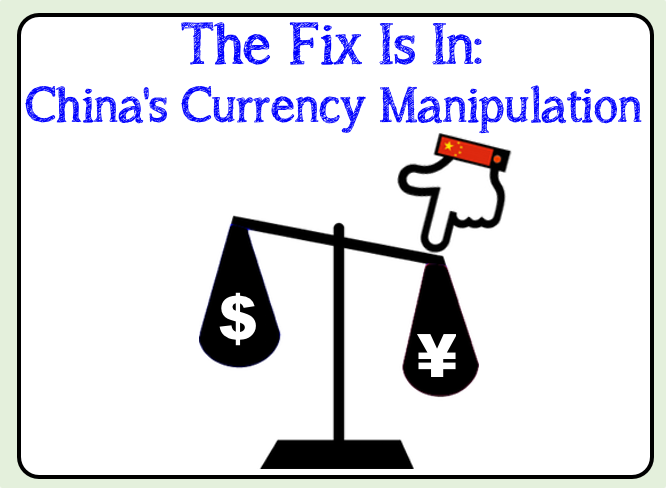 Or should I say lack thereof.

This is a very hot-button topic in global economics and politics.  You’ve probably heard anything from the intelligent “China does not freely float its currency” to the emotional “China is a currency cheater and steals jobs from Americans.”

So it should be easy to clear that all up in a simple blog post, right?

If we are going to talk about a complicated topic like China’s alleged currency manipulation, we will need to find an easy place to start.  Enter my favorite tool – the random oversimplified example.

I believe the best starting point is for us to see what happens during a hypothetical “base case” scenario in which global trade is simplified and evenly balanced.  So from here on out, as far as we are concerned there are only two countries in the world – the U.S. and China – and in Scenario 1 they trade with each other like so:

We can keep Scenario 1 fairly simple when it comes to currencies, so let us say that at this starting point, $1 US dollar is equal to 1 Chinese Yuan.  So the exchange rate is $1 USD = 1 CNY.3

Scenario 2: Return to reality by introducing a trade surplus & deficit.

Ok.  So at the end of that first scenario, both countries had a $0 trade balance because everything was equal.

But now Americans discover credit cards and start buying more stuff from China than we sell to China.  So in Scenario 2 this happens:

Now that we are closer to reality in this scenario – the US is buying more crap than it needs and has created a trade deficit with China – we need to bring the whole currency exchange thing into play.5

Ok, so sticking with Scenario 2 in which the US has created a $100 trade deficit – what exactly does that mean?

Let’s walk through what happens if we go to “settle up” at the end of the year.  The US, in total, owes China $100 as a result of the trade deficit.  So what happens when that $100 payment goes from the US to China?

China now has an extra $100 dollars that it didn’t have before.  But China does not need US dollars; it needs its own local currency – the Chinese Yuan or CNY for short.6

So now China has an extra $100 that needs to be exchanged from USD to CNY.  That exchange is an FX transaction buying $100 of Chinese Yuan and selling $100 of US dollars.7  So now we have more buyers of Yuan as a result of that $100 FX transaction.

Question 1:  what happens in real estate when you have more buyers than sellers?  House prices go up, right?

Question 2:  what happens when you have more buyers of a stock than sellers?  The stock price goes up, right?

Well… the same things happens in any other market.  Including the currency markets.

Since we now have more buyers than sellers of Yuan, for our example let’s say that $100 FX conversion/transaction above pushes the exchange rate from our prior point where $1 USD = 1 CNY so that now after the exchange $1 USD only gets you 0.96 CNY.  Said differently, the dollar fell $0.04 or 4% against the CNY.

So now let’s recap Scenario 2.  The US bought $100 more from China than it sold to China, creating a trade deficit.  Once we settled up at the end of the year, China had an extra $100 USD that it converted to CNY.  This caused the Yuan to strengthen against the Dollar.  As a result, the exchange rate is now $1 USD = 0.96 CNY meaning the Yuan is stronger and the Dollar is weaker.

Which brings us to Scenario 3.

Ok.  So let’s take our trade deficit a step further and say the same situation happens for 5 years straight.  Americans love their credit cards and want to buy more stuff.  So the US keeps buying more from China than it sells to China, widening the US trade deficit with China in our third scenario:

So in Scenario 3, we’ve bought $600 from China but only sold $100 to China, resulting in a $500 trade deficit for the US and a $500 trade surplus for China.  So now $500 needs to go from the US to China to settle up.  And China still doesn’t want extra USD so it needs to convert the Dollars to Yuan.

Just like in Scenario 2, the buying of CNY and selling of USD pushes the exchange rate even further.  So let’s say that after five years of trade deficits and all those Dollars being exchanged for Yuan, $1 USD now only gets you 0.80 CNY.  In our example, the Dollar has now fallen 20% against the Yuan.

Well, what does that mean in our hypothetical trade scenario?  It simply means that it is getting more expensive to buy things from China because the Dollar has fallen in value by 20%.

This exchange rate shift – the Dollar falling against the Yuan – will have far reaching effects in our economic example.  The Dollar has fallen by 20% against the Yuan, which now means the US either has to pay more to get the same amount of goods from China, or has to buy less and it will cost the same.

But that’s just the US side of things because the Dollar is falling.  If the dollar has fallen 20%, then the Yuan has obviously risen 20%.  So while it has become more expensive for the US to buy Chinese goods, it has now become cheaper for China to buy goods from the US.

And so at the end of Scenario 3, this shift in the exchange rate forces an “automatic rebalancing” of trade.  With the Dollar weaker, let’s assume the US no longer wants to buy $600 of Chinese goods.  So now the US only buys $300 of Chinese goods.  But with the Yuan stronger, the Chinese now wish to increase purchases of US goods from $100 to $300.  Like this:

And so, the balance of trade has returned to $0 for both countries because of the “automatic rebalancing.”

Over the course of our three scenarios, the trade imbalance caused the US Dollar to fall against the Yuan.  Once the US could no longer afford as many Chinese goods and the Chinese could afford more US goods, an automatic rebalancing occurred as the US bought less from China and the Chinese bought more from the US.

Or at least that’s the way the global economy is supposed to function.

…but no longer does.  Because China has changed the game.

Ok.  So as we talked about in a prior post on China’s GDP, China needs to be the leader in manufacturing and building “stuff” to keep its 1.4 billion citizens happy and employed.8  Since China has created a large trade surplus with the US… that trade surplus has created a lot of GDP (i.e. “wealth”) in China.  China built factories for its new manufacturing economy, apartments to house the workers, new roads and rails to get the goods to market, and the resulting boom created countless jobs for the Chinese who left the old way of life to move to cities and join the new economy.

And China loved this growth.  So much in fact, that it didn’t want the end of Scenario 3 to occur – China did not want the “automatic rebalancing” to take place.

If China allowed the Yuan to appreciate against the Dollar, as we hypothetically walked through at the end of Scenario 3, it would mean the US would buy fewer goods from China, those shiny new factories would go idle, those productive workers would lose their jobs, and the good people of China would protest in the streets and create a lot of problems for the government.  And so not wanting the good times to come to an end, rather than allow the Yuan to rise and an “automatic trade rebalancing” to occur… China instead changed the game.

Remember what caused the currency rate to change in Scenarios 2 and 3 as the Dollar lost value against the Yuan?  It was the extra dollars flooding into China that had to be converted to Yuan which moved the exchange rate.  All that buying of Yuan and selling of Dollars caused the “automatic rebalancing” effect to kick in as the CNY got stronger and the USD got weaker.

Well, instead of just letting all those extra Dollars flowing into China be converted into Yuan the old fashioned way… China just printed new Yuan and kept the Dollars.  But what to do with all those extra US Dollars that are no longer getting converted?

China directed the Dollars it was receiving back to the US in the form of investment.  Said differently, rather than letting Dollars be exchanged for Yuan – which would cause the Yuan to rise – China printed new Yuan, kept the Dollars, and used the Dollars to buy US Treasury Bonds.

That is why you always hear that China buys/owns so much US debt.  China has to keep re-investing all the US Dollars it receives back into US bonds to stop the Yuan from rising.

From hypothetical scenarios back to reality

So we’ve used oversimplified examples to show how China manipulates its currency to keep the Yuan low.  And we’ve said that China hoards the Dollars it receives from its trade surplus with the US rather than letting them be converted.  But don’t just take my word for it; let us instead look at the actual data.  If China is keeping all those Dollars rather than allowing them to be exchanged for Yuan… shouldn’t that information show up somewhere?

The following chart shows the growth of China’s foreign exchange reserves9 over the past 30 years:

This is the result of China hoarding all those Dollars, Euros, and anything else they received from trading parters rather than letting those currencies be converted.  The side effect of preventing the Yuan from strengthening is that China now holds almost $4 Trillion of foreign exchange reserves.

For 30 years China has been able to prevent the automatic rebalancing of trade by artificially weakening its currency.

But this is not going to continue indefinitely.

In the much shorter conclusion and Part 2 of this series… we’ll examine the economic, political, and cultural changes that will eventually force the appreciation of the Chinese Yuan.

Click here to read The Fix Is In Part 2.