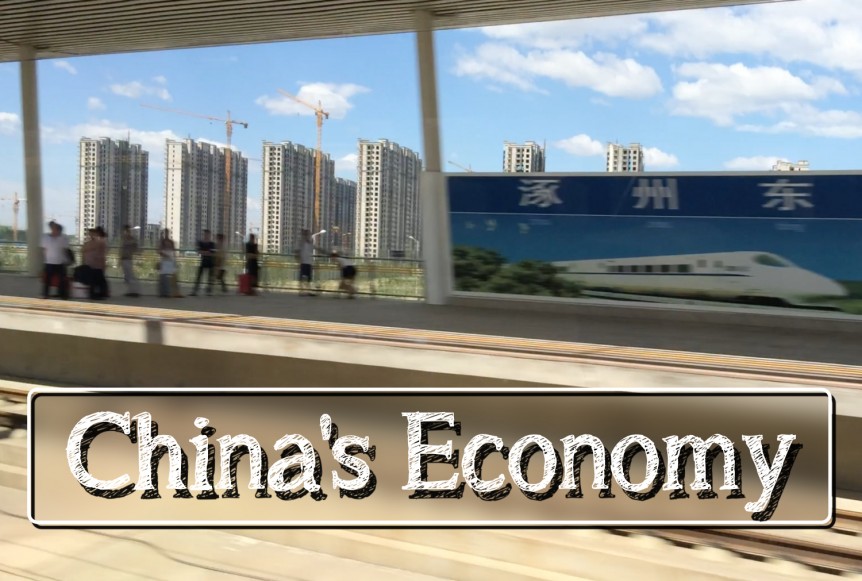 So. Let’s get a post out there on China’s economy.  Which is really really big.  China passed Japan not so long ago to take the silver for 2nd largest economy in the world.   1<- – – Click this little footnote.

The Chinese economy is huge, coming in at about 10.4 trillion dollars for 2014.2  So obviously this post isn’t going to fully explain it or even scratch the surface.  Also, as I’ve disclaimed before, this post is just a few of my thoughts and opinions and I don’t pretend to be an expert on the country or subject matter.  For China, the economy is so big and the topic so vast I don’t even pretend to be a… well, whatever a few levels below the level of expert is.  I can think of at least 1.35 billion people who are more of an authoritative source on China than I.3

So one could devote a lifetime to this topic and never finish as it’s constantly evolving, growing, and changing.  But of course that’s not going to stop me from trying to oversimplify it as best I can, provide a little commentary of what’s going on there, and give my opinion on where it might be headed.

I’ll start not with a bunch of numbers or pretty charts, as one might expect, but rather with this short, shaky, poor-quality video I took from a train:

What are those rows and rows of apartment towers in the middle of nowhere?

There was no city on the other side of the train either.  Just those random rows of towers.  We saw batches of these apartment/condo tower clusters all along the way on our train ride through northern China.  A few of them were somewhat close to Beijing or another mostly-urban looking area where the train stations were located, but the majority were quite far from, well, everything.  And they were massive projects: 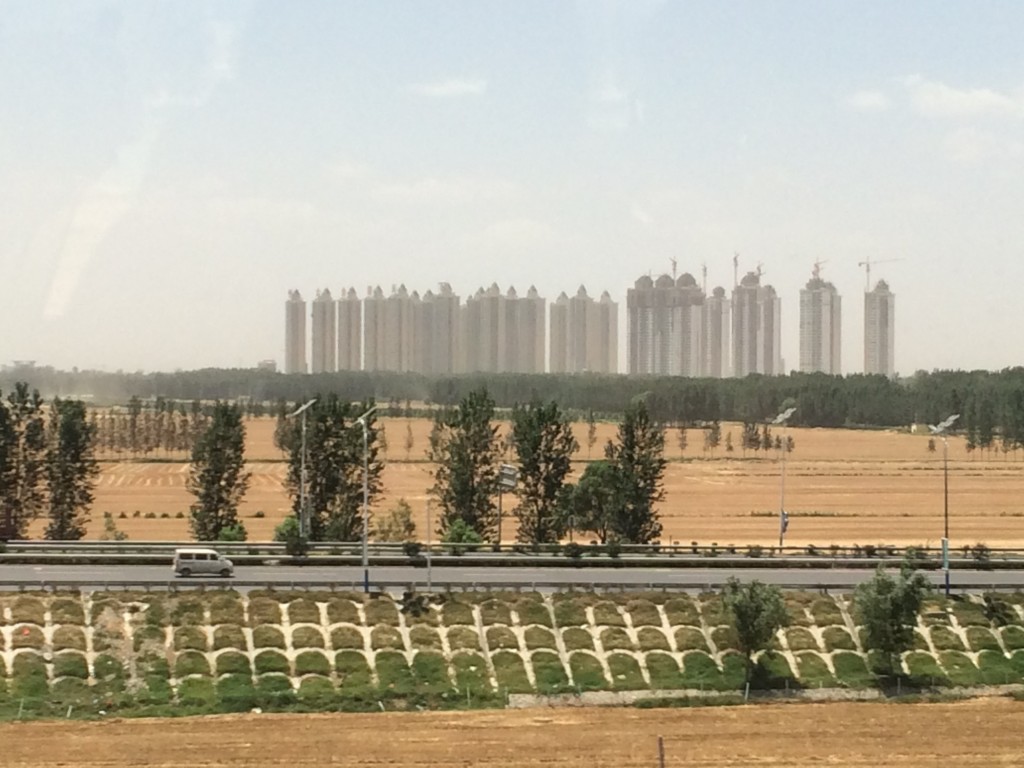 Rows of apartments and/or condos. In a random corn field. (?) 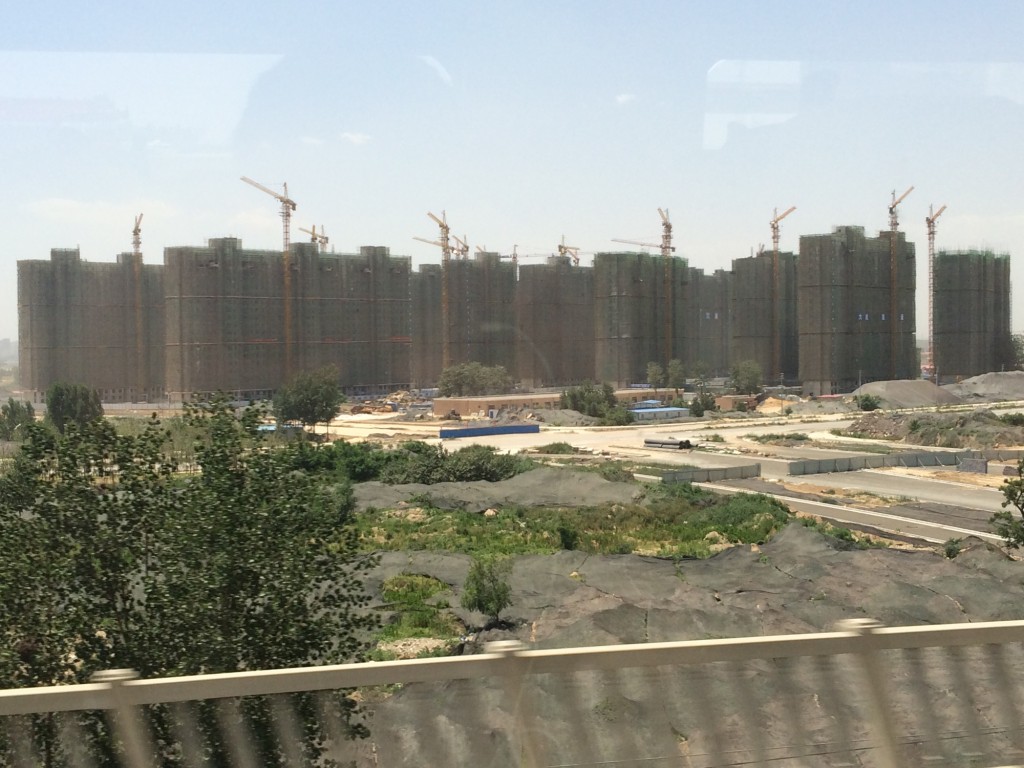 Another batch of them. Modeled after… a 1970s Long Island housing project? (j/k) 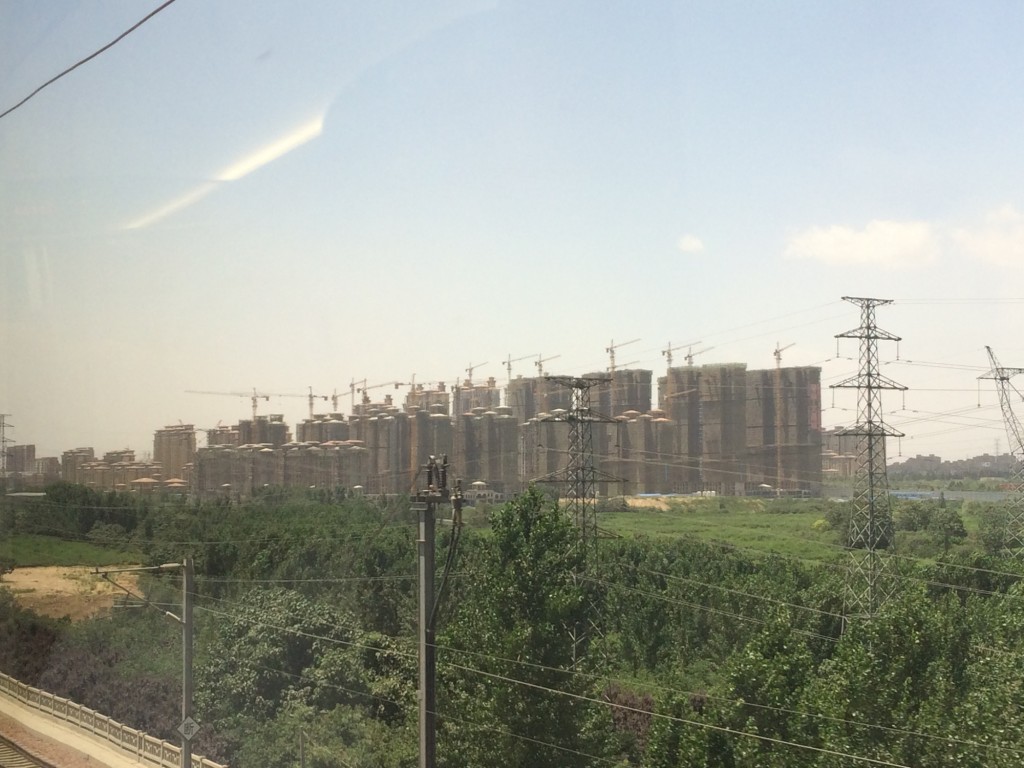 This one was particularly large. Hard to tell from this pic, but both “things” behind it in the distance are more condos. We didn’t see any skyscrapers or large factories near this one either. 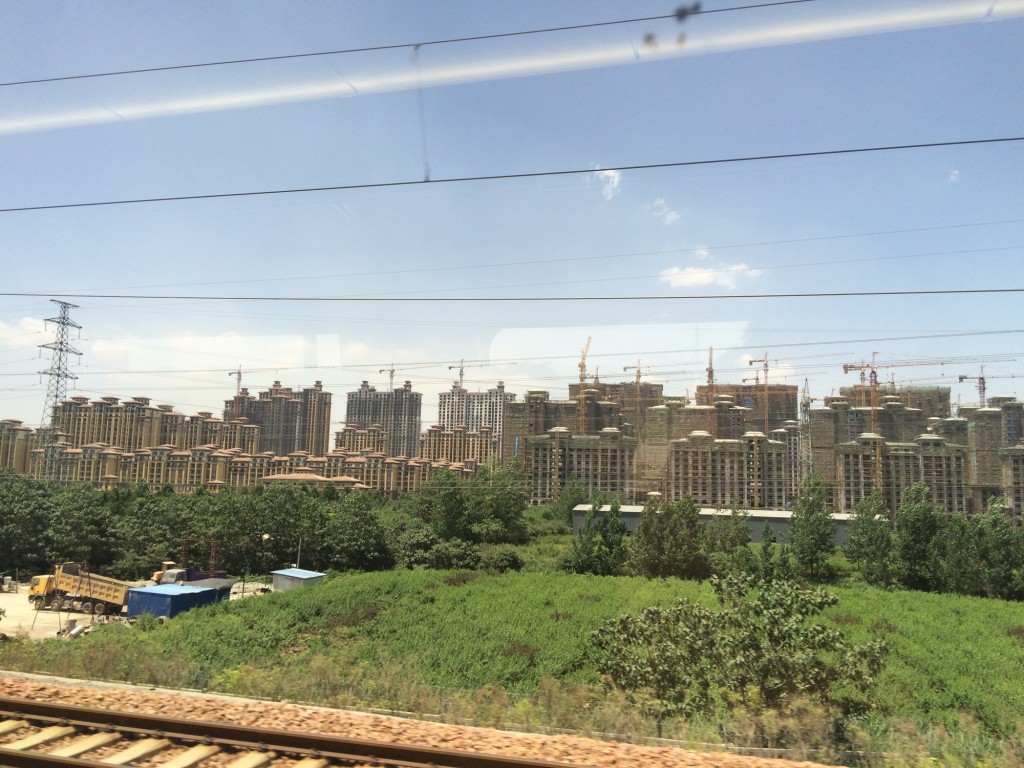 …And a front view of the same one. I guess eventually they’ll look like the ones on the left.

And these were as we passed a station on the way to… Wait. Never mind. This one’s a screen shot from the 2010 film “Inception.”

We saw soooo many of these clusters of buildings on our train journey.  Here’s one last (shorter) video before I move on:

Each time we passed a new one, this conversation repeated itself.  Pretty much verbatim:

I couldn’t stop thinking about how remote some of these were.  Why build row upon row of apartment and condo high rises in the middle of nowhere OR on the far far far outskirts of a city?

Well…  that is how China ensures that it gets that 7% GDP growth every year that you’ve probably heard about, economic growth which it desperately needs to keep everyone employed and happy.  China is so dependent on building new apartments, factories, and office towers, that it continues to over-invest in these projects.  So much so that between 2011 and 2013, China poured more concrete than the United States did in the entire 20th Century!  That… is a lot of construction.

As the building has continued unabated, China has built way more housing, office space, and factories than it needs.4  This overcapacity has not gone unnoticed either; major media outlets have even dubbed these projects “Ghost Towns.”

I’m not making that phrase up.  There are reports that pop up from time to time that talk about a new “ghost city” here or there in China.  The media loves covering these whenever they want to take a shot at the Chinese economy or talk about a potential real estate bubble there.

Here are two random slides shows from reputable news sources here and here if you are interested in clicking through so photo examples.  And… if you have 12 minutes to kill, this piece from 60 Minutes is fascinating!5

So why do these Ghost Towns exist?  Why build row after row of condo buildings and even entire mini-cities that are empty?

Well.  Here’s the easiest way to sum it up.

China is like a shark.  It must keep swimming or it will die.  Except “swimming” is really “building stuff.”  China needs to keep building things and making stuff or the economy will crash.

Which I’ll explain in further detail in the next post. 6