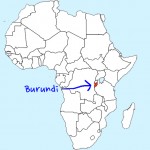 Note: I was originally working on a quick post of what I thought was some random, cool, and interesting news from around the frontier and emerging market world – which I will hopefully do from time to time – and instead I started thinking more about one of the links I was going to share.

Specifically, a link related to the recent attempted coup in Burundi (click that little map to the left to enlarge).  And then I decided instead to write a quick post about it. 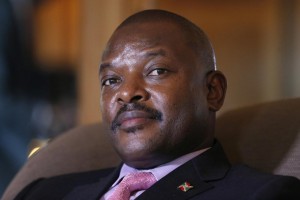 So here’s the deal:  Burundi’s President Pierre Nkurunziza wants a third term, but according to the constitution he is limited to two terms and cannot run again.  His argument is that his first term was appointed by parliament and not elected by the people so it does not count.  But this part of the story is now old news… Nkurunziza announced back on April 25 that he was going to run again, which sparked protests and a lot of general unrest in the country.  At least 20 have died in the protests and the situation in the country has been very very tense.  So now let’s move forward to two weeks ago.

President Nkurunziza left the country to visit Tanzania for a regional summit.  While he was gone, Major General Godefroid Niyombare (the former intelligence chief who was fired by Nkurunziza recently) launched a coup and announced that he had “dismissed” President Nkurunziza to form a transitional government until elections could be held.  For about 36 hours it seemed as though the coup was successful.

But, as is often the case, the military was loyal to the President and basically said “Nope.”  And so Nkurunziza returned, the coup was easily thwarted, and the tense atmosphere is likely to continue into the June elections. 1

Hopefully this is resolved peacefully. Like really really hopefully. The UN estimates that over 100,000 have already fled Burundi and there are fears that if the situation escalates, Burundi could slip back into civil war.  As a quick history flashback, and very recent history at that, this is the same Burundi that was locked in civil war from 1993 to 2005 when an estimated 300,000 people died.  The end of the civil war is commonly marked by the swearing in of President Pierre Nkurunziza.  Yep, the same guy.

So to recap we had a nasty civil war, then only one President who now wants to keep power, is challenging the constitution to do so, and those not loyal are terrified and leaving the country.  Oh, and since I started writing this a few days ago the opposition leader has been killed.  None of these are good things.

I’ll stop there with the Burundi play-by-play since the situation is rapidly evolving; a simple google search can obviously keep you more informed than I can.  But the situation in Burundi is bad and – sadly – probably gets worse before it gets better.

The Wider Implications for Africa.

Here’s the thing… this isn’t just another coup story; it’s unfortunately part a broader problem. Remember that recent election in Nigeria?  It was a really big deal because outgoing President Goodluck Jonathan stepped aside for democratically elected President-elect Muhammadu Buhari.  This was the first time in Nigera’s history that a sitting president was unseated. 2  Had Jonathan disputed the election, Nigeria (Africa’s largest economy) could have easily slid into violence as well.  So nice work, Nigeria! 3

Despite the recent success in Nigeria, the story in Burundi – both attempted coups and a President who will not give up power – still seems to be all to common in Africa. 4 So let’s discuss why things are so crazy.

**Begin oversimplification of a really really complicated issue for purposes of this post.**

Think of what happens AFTER you are President in the US (or Head of State in many other countries).  You get a multi-million dollar book deal, probably party with Bono at some point, give expensive speeches, maybe join a think tank, go on talk shows, speak at the UN or to other top-shelf organizations, continue to meet other world leaders, definitely do not fly Southwest anymore, and generally stay relevant and important.  It pays to be an ex-President.  And it pays very well.

Not so in Africa.  Instead of all those cool things above, you probably go from being on top of the world (or at least your country) to being forgotten completely.  Which just might be why so many rulers in Africa don’t want to release the reigns once they have power.

And now getting back to that whole “paying you $5 mil to not be a President” thing. 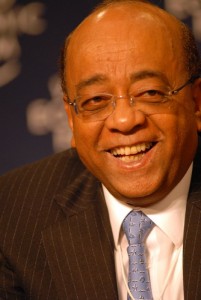 Dr. Mohamed Ibrahim is a pretty cool guy.  And he’s a Sudanese billionaire.  He founded Celtel (which dominated the mobile market in Africa) and sold it for over $3 billion… and then he decided to do a very awesome thing and established the Ibrahim Prize for Achievement in African Leadership.

The concept is fairly simple: Mr. Ibrahim decided that since former African leaders typically don’t receive a multi-million dollar book deals or get to meet Bono, let’s instead give them some incentive to be good Presidents, leave their country in better shape than they found it, and – most importantly – peacefully step aside.  But instead of carrot-and-stick,  Mo’s policy is more carrot-and-tastier-carrot.

The winner of The Prize receives $5 million dollars over 10 years and then $200k per year for life.

I would totally step aside for that deal.  But… not everyone agrees.  Because the prize was awarded this year to outgoing Namibian President Hifikepunye Pohamba AFTER A TWO YEAR HIATUS. 5

In eight years there have been four recipients.  Not an awesome track record… but better than nothing.

Ok, so no $5 mil for Nkurunziza

It would have nice to have seen Burundi host peaceful elections and for President Nkurunziza to have stepped aside.  Who knows, he might even have been standing next to Mo and holding one of those comically large checks for $5 mil in a year or two. 6  But sadly it doesn’t look like that is going to happen.

In the meantime, coups in Africa will probably/sadly continue to be a thing with more articles popping up (like this and this) from recent events in Burundi as the world debates if there is in fact such a thing as a “good coup.”